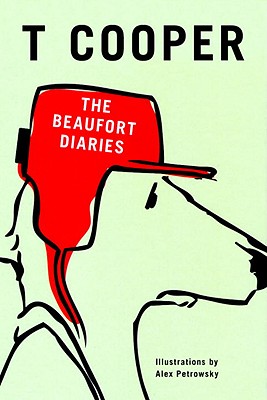 JUST A SMALL TIME BEAR, LIVING A LONELY WORLD: What happens when an arctic refugee finds himself adrift in LA-LA Land? Behold Beaufort's rocket rise to stardom, his inevitable crash and burn, his enduring friendship with Leonardo DiCaprio, and his painful journey to redemption and bear-awareness.

Turns out when you're a dying breed in Hollywood, it's tough to go with the floe.

T Cooper is the author of the novels "Lipshitz Six, or Two Angry Blondes," and "Some of the Parts," as well as co-editor of the anthology "A Fictional History of the United States With Huge Chunks Missing." His work has appeared in a variety of publications and anthologies, including "The New Yorker," "The New York Times," and "The Believer," among many others. Cooper lives in New York with his family.

Illustrator Alex Petrowsky is a designer who was born in Vienna, and currently lives in St. Louis, Missouri.

"It's a sad state indeed when polar bears have nowhere to go but Hollywood after being forced from their rapidly-diminishing natural habitat. With any luck, Beaufort's epic, instructional journey will help make him the last bear on Earth to have to work for food and survival in the bear-eat-bear film industry."
—Tea Leoni, actor

“T Cooper is a prodigious talent, who manages not just to ‘Make it New’ but
also to ‘Make it Great.’ ”
—Darin Strauss, author of Chang and Eng and More Than It Hurts You

"T Cooper does the kind of thing that drives other writers mad: He takes the bones of stories told many times, in many ways, and shapes them into something singular and breathtaking. . . . Cooper's nearly flawless prose is the meat of this work: It's as if the author challenged himself to test his talents with a scenario that in less able hands would almost necessarily lapse into cliché and cheap satire. Instead, Cooper makes it original, humane, and deeply funny."
—Austin Chronicle