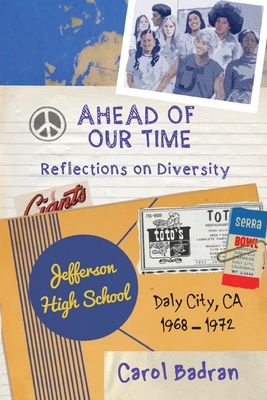 In September, 1968, during the turbulent era of school bussing, protests, assassinations, and race riots, Carol Badran entered Jefferson High School in the working-class suburb of Daly City, California. Many students arrived at "Jeff" with trepidation because "everyone knew it was a rough school." In other words, it was racially and ethnically mixed. Jeff proved to be the opposite of rough-a place where people chose their friends based on personality and fights were about plain old teenage hormones like at any high school. Race or ethnicity was no barrier to becoming class president or homecoming queen.

Carol looked beyond the nostalgia of the high school yearbook, asking forty former classmates and teachers to reflect on how their "rough" school-more known for its laid-back culture than its academic standards-worked so well for its school community in a time when the United States was 88% White and racial conflict was rife.

Ahead of Our Time is a celebration of American diversity and a testament to the dream of Dr. Martin Luther King, Jr., where people judge one another by the content of their character, and nothing more.

Jeff allowed me to be me. No one ever told me I couldn't do certain things.

Jefferson . . . made me unafraid of going out in the world and being around people who didn't look or sound like me.

I was lucky enough to know many cultures-my friends, their parents, their food, lifestyles, etc. We're still all the same, despite these differences.