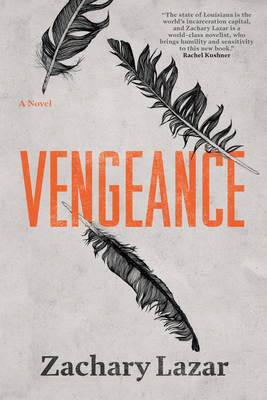 “While visiting the Angola prison to watch an Easter pageant, a writer meets Kendrick King, a black inmate facing life imprisonment for a crime he says he didn’t commit. The subsequent investigation into Kendrick’s life becomes a look at just what the truth means in a society built upon a flawed justice system. Lazar handles the unnamed writer’s doubts with aplomb as the investigation spreads across people from Kendrick’s past life, striving to answer questions that do not have easy answers and, quite frankly, may not be answerable at all. Vengeance handles its burden of unanswerable questions well in a time where the even the most obvious of truths is met with skepticism.”
— Steven Shonder, Anderson's Bookshops, Naperville, IL

“Tense and evocative . . . Despite its powerful social critique, Vengeance is cautious and prismatic, openly troubled by its own claims to authority.” —Katy Waldman, The New Yorker

As someone who writes “fiction, nonfiction, sometimes a hybrid of both,” the narrator of Vengeance, a character much like Zachary Lazar himself, tries to accurately view a world he knows is “beyond the limits of my small understanding.” In particular, he is compelled to unravel the truth behind the supposed crime of an inmate he meets and befriends, Kendrick King, who is serving a life sentence at Angola for murder.

As the narrator attempts to sort out what happened in King’s life—paying visits to his devoted mother, his estranged young daughter and her mother, his girlfriend, his brother, and his cousin—the writer’s own sense of identity begins to feel more and more like a fiction. He is one of the “free people” while Kendrick, who studies theology and philosophy, will never get his only wish, expressed plainly as “I just need to get out of here.” The dichotomy between their lives forces the narrator to confront the violence in his own past, and also to reexamine American notions of guilt and penance, racial bias, and the inherent perversity of punitive justice.

Inspired by a passion play, The Life of Jesus Christ, he witnessed at the Louisiana State Penitentiary at Angola, Vengeance, by way of vivid storytelling, helps us to understand the failure of empathy and imagination that perpetuates the incarceration crisis in our country.

“The state of Louisiana is the world’s incarceration capital, and Zachary Lazar is a world-class novelist, who brings humility and sensitivity" to this book (Rachel Kushner).
Zachary Lazar is the author of four previous books, including the novel Sway, the memoir Evening’s Empire: The Story of My Father’s Murder, and the novel I Pity the Poor Immigrant, a New York Times Notable Book of 2014. His honors include a Guggenheim Fellowship, a Hodder Fellowship from Princeton University, and the 2015 John Updike Award from the American Academy of Arts and Letters for “a writer in mid–career whose work has demonstrated consistent excellence.” Lazar’s journalism has appeared in The New York Times, NPR’s All Things Considered, the Los Angeles Times, and elsewhere. He lives in New Orleans, where he is on the creative writing faculty at Tulane University.
Praise for Vengeance

A One Book One New Orleans Selection

"[An] absorbing and prismatic new novel. . . . Lazar can be deeply moving as he captures the hopelessness that surrounds him. . . . Throughout the novel, we feel heartbreaking possibility, the near miss of lives that might have been." —Mark Sarvas, The New York Times Book Review

“Tense and evocative . . . . Despite its powerful social critique, Vengeance is cautious and prismatic, openly troubled by its own claims to authority.” —The New Yorker

"This powerful new novel about a murder investigation, mass incarceration, and the monstrously powerful, profoundly entrenched structural racism in the United States, reads like the best investigative journalism. But it is also deeply literary—with vividly drawn characters, a compelling narrative arc, and philosophical reflections on the nature of justice and perception." —Library Journal

"Vengeance is profound in its exploration of the U.S. penal system. It's empathetic without being sentimental in the treatment of its characters, both in and outside the walls of the prison. Lazar's novel is a beautiful specimen of storytelling while simultaneously challenging its audience to reach deep and question the very core of their beliefs. . . . Settle in and prepare to be changed by this powerful novel." —Jen Forbus, Shelf Awareness

"This contemplative, precise, mesmerizing novel is a smash–up of fiction and nonfiction. The author fuses the genres to ruminate on our constructs of crime and punishment, yielding lines like this: '. . . most people in prison are there not for the public’s safety but out of vengeance, or hatred, or because if they were let out we would have to help them.' Lazar is a truthteller." —Eve Abrams, The human stories behind mass incarceration, TED Talk

"Zachary Lazar's painstakingly crafted novel Vengeance takes on the complicated issues of race, the socially constructed questions of guilt or innocence in late stage capitalism, cultural appropriation, and redemption. . . . Lazar's prose is that of the slow blues. . . . Flannery O'Connor is here, surely, as is Richard Wright." —Zyzzyva

“His investigation into the American underclass proves so subtle, so alert to how a callous system encourages self–destruction, it invites comparisons to In Cold Blood.”—The Brooklyn Rail

“A vivid and unblinking view of the justice and penal systems in modern America.”—Booklist

"Readers looking for an analytical, thorough examination of the justice system will find much to consider here." —Publishers Weekly

“A reminder that fiction can take us to someplace we think we know and make us see it in a new way, or make us wonder if we ever saw it aright to begin with. How do we get at the truth of another person's life? How far can empathy really take us?”—The New Orleans Advocate

“Zachary Lazar's Vengeance is an elegant act of imagination and empathy that shows just how easily these can curdle, sometimes irretrievably, into skepticism and self–doubt. It's the story of a writer with a haunted past who meets, on a visit to Angola, a prisoner currently serving a life sentence for murder. Does he belong in prison, or is he, as he credibly claims, an innocent man? Or is the truth only ever a matter of speculation and the stories we choose to tell?”—Joshua Ferris

“Zachary Lazar’s Vengeance is so sharply and skillfully imagined, I had to keep reminding myself: ‘It’s a novel. It’s a novel.’ The story—about an alleged criminal serving time for his supposed crime—is mysterious in all the ways it ought to be; the riddle of his main character is the riddle of our justice system: How do we figure out what’s true, what’s real, what’s fair? Lazar made me think he had genuine tenderness for the people in this book. His writing can be beautifully quiet. But just when I worried he might go soft on me, he’d hit me upside the glasses with such raw clarity that I got a little disoriented, which is precisely what I love about his books.”—Sarah Koenig, This American Life and Serial

“The state of Louisiana is the world’s incarceration capital and Zachary Lazar, a resident of New Orleans, is a world–class novelist, who brings humility and sensitivity to this new book. The urgency of Lazar’s subject, combined with his graceful submission to it, makes Vengeance incredibly timely, and also timeless in its value as art.”—Rachel Kushner, author of The Flamethrowers, a National Book Award finalist

“I am stunned by the daring, meticulous, and unsentimental intelligence of this riveting book, and by Zachary Lazar's self–questioning humility and honesty, his amazing powers of observation and human connection. Vengeance is a masterwork, the most important American book I've read this year, and the most moving and mesmerizing.”—Francisco Goldman, author of Say Her Name

“More than any book I’ve read in the twenty–first century, Zachary Lazar’s Vengeance makes the reader reckon with the questions of what’s real, what’s imagined, and why those questions matter more in 2017 than at any other time in our nation. Moving between postmodern spectacle and a tale that implicates the reader, Vengeance reminds me of what is possible through deft, imaginative, ‘real’ storytelling.”—Kiese Laymon, author of Long Division