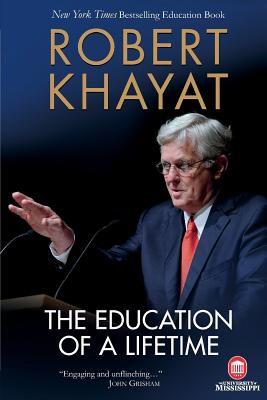 In 1962, while a riot was in full swing on the University of Mississippi campus over the admission of James Meredith, Robert Khayat was an All-Pro kicker for the newly integrated Washington Redskins. He had no way of knowing that, thirty-five years later, he would be leading the University of Mississippi through one of its greatest challenges - its association with the Confederate flag. Robert Khayat's The Education of a Lifetime reveals his childhood days in Moss Point, Mississippi; the state's segregationist policies that prevented his SEC championship baseball team from playing in the College World Series; and the sadness of watching his father's arrest. These seemingly disparate events worked to prepare him for his future battle with the vestiges of racial strife that continued to haunt Ole Miss' culture when he was selected as the University's fifteenth Chancellor. We relive, along with the author, the courting of eccentric donors; private conversations with presidents, governors, football coaches, and celebrities; and the struggle to find a balance between the South's past and a promising future. In this funny, touching, and insightful memoir, readers get a behind-the-scenes look at how one man's vision and dedication - along with a commitment to respecting the dignity of every individual - can change a culture.

Robert Khayat is a former college football All-Star, All-Pro kicker for the Washington Redskins, law professor, and president of the NCAA Foundation. He holds degrees from Ole Miss and Yale, and was an Academic All-American football and baseball player while at Ole Miss. He has received the NFL Lifetime Achievement Award, as well as the National Football Foundation Distinguished American Award. Dr. Khayat served as the fifteenth chancellor of the University of Mississippi from 1995 until 2009. He and his wife, Margaret, live in Oxford. They have two children and three grandchildren.