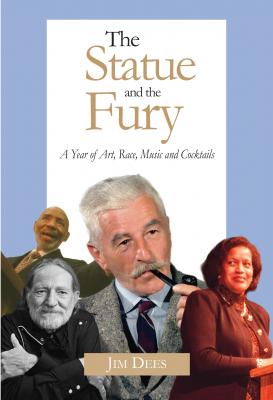 In 1997, Oxford, Mississippi sought to build a statue to honor the 100th birthday of native Nobel laureate, William Faulkner. In this funny and heartfelt memoir, Thacker Mountain Radio host Jim Dees, chronicles the year-long civic contretemps that erupted over a magnolia tree that was cut down to make room for the sculpture. The same year, Oxford became embroiled in a “trees versus development” dispute that saw citizens arrested for blocking bulldozers. Meanwhile, the University of Mississippi pursued plans to discourage use of the Confederate flag, the song “Dixie” and the Col. Rebel mascot setting off protests and death threats. Dees brings his signature wit and insight to these pivotal events and includes interviews with James Meredith, Shelby Foote, Willie Morris, Mrylie Evers and… Willie Nelson.

Jim Dees is the author of Lies and Other Truths: Rants, Raves, Low-Lifes and Highballs and the editor of They Write Among Us: New Stories and Essays From the Best of Oxford Writers. Since 2000, he has been the host of The Thacker Mountain Radio Hour, a music and literature program heard weekly on Mississippi Public Broadcasting.

“The Statue and the Fury reads like a fever-dream. The writing of Jim Dees turns out to be just as gonzo as his shirts, and that’s saying a lot. For those of us who wish we could live year-round in Oxford, this wild book is as close as you can get without having to pay property taxes.”
Harrison Scott Key, Author of The World’s Largest Man
and finalist for the Thurber Prize in American Humor

“At times profound, at times deeply insightful and often hilarious, Jim Dees’ The Statue and the Fury is a loving look at small-town life, journalism and politics. I’ve been a fan of Dees’ writing for years, and this is the book I’ve been waiting for.”
Tom Franklin, Edgar Award-winning author of Crooked Letter, Crooked Letter

“This book may be the best thing I’ve read out of Mississippi in a long while. Dees knows where the bodies are buried and takes great glee in exhuming them. Throw in his deadpan humor, and you have a rollicking, informed and erudite read about everything from James Brown to the Hale-Bopp comet.”
Rheta Grimsley Johnson, syndicated columnist and Pulitzer Prize finalist

“Only Jim Dees could take a small-town controversy and turn it into the backbone of such a terrific book. This is the kind of inspired eye for detail and recognition for the absurd that Robert Altman would have loved. A truly unique reflection on a storied Southern town at a turning point. I’m so glad Dees was there to document it all and write this funny and insightful true story.”
Ace Atkins, New York Times bestselling author, The Innocents

“A great book for anyone interested in small-town politics. Or journalism. Or Southern studies. Or Faulkner. Or racial reconciliation. Or good writing. Or, well, anything. . . This delightful cultural history, mediated through Jim Dees’ clear-eyed, humorous and surprising prose, provides so much entertainment that we might not notice how much we’re learning. This is a thoroughly necessary book.”
Beth Ann Fennelly, Poet Laureate of Mississippi

“In his humane and sardonic way, Jim Dees is writing about the soul of Oxford, Mississippi. There’s no one better for the job. This book is no cold, stately object. It’s funny, violent, serene and surprising — a living thing, like a tree.”
Jack Pendarvis, Emmy Award-winning writer