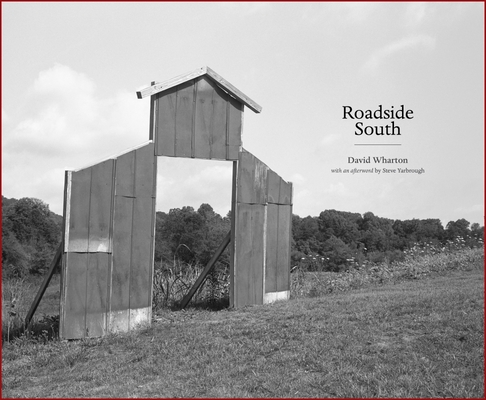 
On Our Shelves Now
Much of the American South, especially its small towns and rural areas, is connected not by interstate highways but through a web-like network of country roads, many of which appear only on the most detailed of maps. These are the backroads that most Southerners drive on every day. Unlike the interstates, whose roadsides have been largely scrubbed clean of regional character, these smaller roads travel through unplanned, vernacular landscapes that tell much about local life, both past and present, and suggest that we make connections between the two.

David Wharton has been traveling throughout the American South since 1999, resulting in his first two books -- Small Town South (2012) and The Power of Belief: Spiritual Landscapes from the Rural South (2016). As he journeyed, he often paused to make pictures of hamlets and the countryside he was driving through that did not fit the themes of those earlier books. These are scenes that speak to a sense of wonderment, or curiosity, about how those landscapes came to be and how they reflect a complex past with a modern-day world in which the urban competes with the rural in nearly every way.

In Roadside South, the third book in Wharton's magical Trilogy of the American South, the photographer captures the quirky and the humorous, the sometimes sad and sometimes ironic scenes that are commonplace along the local, county, and state roads of the South. No artist has revealed the on-the-ground truth of the South as Wharton has, giving rise to a new understanding of and appreciation for a distinctive regional culture that all too frequently, and sometimes mistakenly, is imagined as a bastion of rural and small-town virtue.