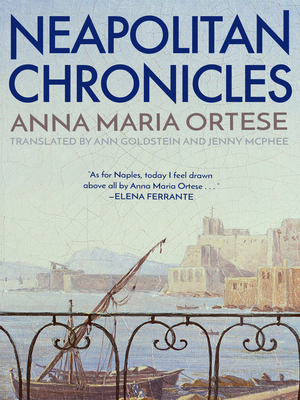 Calling all Elena Ferrante fans, or anyone interested in post-WWII Italy, or just engrossing stories. Ortese (1914-1998) was a widely acclaimed, prize-winning writer who highly influenced Ferrante, who's said, "...I feel drawn above all by Anna Maria Ortese." These short stories and journalistic pieces, first published in 1953, paint a deeper and darker picture of Naples, a devastated, brutal city of nearly unimaginable poverty. Unlike Ferrante's  Naples, there's not much humor or hope in Ortese's work, but her writing is masterful, and somehow painfully realistic and gorgeously surreal at the same time.

A riveting classic of European literature, this superb collection of fiction and reportage is set in Italy's most vibrant and turbulent metropolis--Naples--in the immediate aftermath of World War Two. These writings helped inspire Elena Ferrante's best-selling novels and she has expressed deep admiration for the author of this volume, originally edited in Italian by Italo Calvino. Goyaesque in its depiction of the widespread suffering and brutal desperation that plagued the city, it comprises a mix of masterful storytelling and piercing journalism. This book, with its unforgettable portrait of Naples high and low, is also a stunning literary companion to the great neorealist films of the era by directors such as Vittorio de Sica and Roberto Rossellini. Neapolitan Chronicles is exquisitely rendered in English by Ann Goldstein and Jenny McPhee, two of the leading translators working from Italian today. Included in the collection is "A Pair of Eyeglasses," one of the most widely praised Italian short stories of the last century.

Anna Maria Ortese (1914-1998) is one of the most celebrated and original Italian writers of the last century. Neapolitan Chronicles brought her widespread acclaim in her native country when it was first published in 1953 and won the prestigious Premio Viareggio.

Anna Maria Ortese (1914-1998) is one of the most celebrated and original Italian writers of the 20th century. Neapolitan Chronicles brought her widespread acclaim in her native country when it was first published in 1953 and won the prestigious Premio Viareggio. Ann Goldstein has translated The Neapolitan Novels and other works by Elena Ferrante, as well as writings by Primo Levi, Giacomo Leopardi and Pier Paolo Pasolini. She is the former head of the copy department at The New Yorker. Jenny McPhee has translated works by Giacomo Leopardi, Primo Levi, Natalia Ginzburg, Paolo Maurensig and Pope John Paul II.