Welcome to Lagos: A Novel (Paperback) 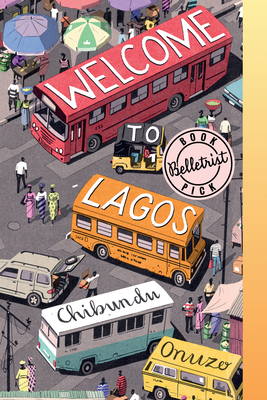 Welcome to Lagos: A Novel (Paperback)

“A disparate and electric ensemble cast - sad, hopeful, honorable, conniving, quixotic, and just plain wacky - drive Chibundu Onuzo's remarkable debut, but it's the character of Nigeria itself - the air and soil of its countryside and the high-voltage freneticism of its largest city - that so often shines through, undeniably alive. Equally madcap, heartbreaking, and redemptive, Welcome to Lagos unflinchingly and beautifully captures the ambitions and contradictions of a nation on the brink.”
— Sam Kaas, Third Place Books, Lake Forest Park, WA

“Welcome to Lagos dips its toes into many pools: it kicks off in a warzone, roams the bewildering tangle of Lagos, and incorporates elements of crime fiction, cultural reportage, and even buddy-film camaraderie. The author pulls it all off with deft humor and sharp observations, bringing one of the world’s great conurbations into focus.”
— Ryan Murphy, Three Lives & Co., New York, NY

A stellar debut novel from a rising star we are bound to hear more from in the future. With a killer title like that and being Nigerian you had better nail it and Onuzo definitely backs it up. Chike Ameobi is an army officer fighting the rebellion in the Niger Delta but when he is asked to kill innocent civilians he and one of his platoon members decide to desert. No sooner than they escape the war zone Chike finds himself becoming the de-facto leader of a new rag tag crew of runaways looking for a fresh start in Lagos. The city comes alive in Onuzo’s deft hands and the result is a tale that will stay with you for some time.

— From Cody's 2018 Picks
“Storylines and twists abound. But action is secondary to atmosphere: Onuzo excels at evoking a stratified city, where society weddings feature ‘ice sculptures as cold as the unmarried belles’ and thugs write tidy receipts for kickbacks extorted from homeless travelers.” —The New Yorker

When army officer Chike Ameobi is ordered to kill innocent civilians, he knows it is time to desert his post. As he travels toward Lagos with Yemi, his junior officer, and into the heart of a political scandal involving Nigeria’s education minister, Chike becomes the leader of a new platoon, a band of runaways who share his desire for a different kind of life. Among them is Fineboy, a fighter with a rebel group, desperate to pursue his dream of becoming a radio DJ; Isoken, a 16–year–old girl whose father is thought to have been killed by rebels; and the beautiful Oma, escaping a wealthy, abusive husband.

Full of humor and heart, Welcome to Lagos is a high–spirited novel about aspirations and escape, innocence and corruption. It offers a provocative portrait of contemporary Nigeria that marks the arrival in the United States of an extraordinary young writer.
Chibundu Onuzo was born in 1991 in Lagos, Nigeria. She studied history at King’s College London and is currently pursuing a Ph.D. in history at the same institution. Her short stories have been commissioned by BBC Radio, and she writes for The Guardian, with a special interest in Nigeria.
Praise for Welcome to Lagos

“Storylines and twistsabound. But action is secondary to atmosphere: Onuzo excels at evoking a stratified city, where society weddings feature ‘ice sculptures as cold as the unmarried belles’ and thugs write tidy receipts for kickbacks extorted from homeless travelers.” —The New Yorker

"An adventure to somewhere I've never been." —Jake Tapper, The Washington Post

"Lives as varied as they are storied find themselves together in Lagos. . . . It is a true testament to Onuzo’s natural storytelling skills that she orchestrates, with humor, panache and multilingualism, the meeting of all these characters." —Star Tribune

"Onuzo's lively, well–plotted novel summons up the great city of Lagos with all its complexity." —Houston Chronicle

“Chike Ameobi may be an army officer in Nigeria but he doesn’t take orders from just anyone. When he’s commanded to take innocent lives, he sets off to Lagos where he gets involved in the midst a new scandal with a new group of misfits, all destined to make a change.” —Parade

"Heralds the young writer's great talent, her ability to weave together multiple story lines into one vibrant tapestry, and her gift at inhabiting myriad perspectives while maintaining the singularity of each individual voice." —NYLON

“Get to know Lagos in this irresistible masterpiece by Chibundu Onuzo. Searching, or rather, escaping to a better life is the motivation behind the protagonist, Chike's, arrival to Lagos. But that doesn't mean that he can escape the political scandals around him." —Hearst Media

“Onuzo spins a vivid and wild tale of crisscrossing lives and destinies in a city filled with injustice and opportunity, complexity and corruption.” —Shondaland

"A funny, insightful celebration of contemporary Nigeria that masterfully answers Adichie’s call to rid the world of 'single stories.” —Chicago Review of Books

"Welcome to Lagos is a deftly painted, intricate portrait of a city that isn't often explored in literature, and Chibundu Onuzo takes readers on a journey to the heart of it, filling each character–driven page with some of the most fascinating scenes we've read in a long, long time." —PopSugar

"Reminiscent of the work of Chimamanda Ngozi Adichie and Chinua Achebe, Onuzo’s latest follows a Nigerian army officer who deserts his post and flees to Lagos with a band of ragtag runaways." —PureWow

"In the streets of the diverse, madcap, magical, and intense city of Lagos, Nigeria, a ragtag group of folks fleeing from different circumstances find a home together, squatting in a politician’s abandoned apartment. The characters are dynamic and fascinating . . . A remarkable and fresh book." —Read It Forward

"A tangy Ocean’s Eleven–esque escapade that exposes class and ethnic divides in the country even as it manages to mock the West for its colonial gaze toward the African continent as a whole. Full of nuance, the story spares no one as it careens toward its satisfying finale." —Booklist (starred review)

"In her winning U.S. debut, Onuzo anatomizes a tumultuous city and its inhabitants, from street hustlers to well–connected government ministers. . . . Onuzo’s briskly plotted novel is a rewarding exploration of the limits of idealism and transparency against widespread cynicism and corruption."—Publishers Weekly

"Onuzo colorfully and adeptly stitches many patches of dialect, religion, class, and gender to portray life in Lagos. Purchase where curricula include an emphasis on contemporary world literature or where Chinua Achebe’s Things Fall Apart is studied." —School Library Journal

"Onuzo's novel is at once a Robin Hood tale and a cross section of Nigerian society. . . . She avoids grand defining statements about Lagos, smartly letting the predicaments of each character show how the city's lawlessness runs parallel to its bustle. . . . The novel is marked by lively storytelling throughout. A well–turned tribute to the freedom and frustrations of a diverse city."—Kirkus Reviews

"Welcome to Lagos is a delicate, honest depiction of humanity in a country’s darkest periods. Chibundu Onuzo brilliantly captures the essence of a people and a place."—Nicole Dennis–Benn, author of Here Comes The Sun

“Overflowing with lush descriptive commentary, Welcome to Lagos doesn’t just give us a glimpse of Nigeria, it transports us there. Onuzo’s storytelling is masterful, her characters are irresistible, and her voice is astounding in its subtle power. Onuzo stands on the shoulders of Chinua Achebe and Chimamanda Ngozi Adichie, and from her perch offers her own fresh, but assured view.”—Margaret Wilkerson Sexton, author of A Kind of Freedom