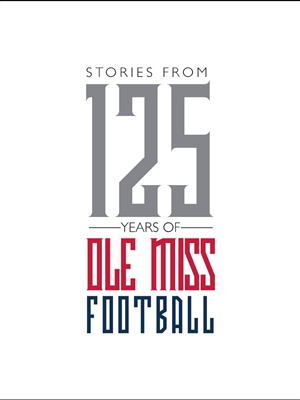 To commemorate 125 years of Ole Miss football history, the Nautilus Publishing Company has published Stories from 125 Years of Ole Miss Football, a collection of stories and photographs that don’t fit the typical “sports book” model.

Editor and Publisher, NEIL WHITE, said, “We didn’t want to re-package the same stories that have been repeated through the years. Every interview began with a simple question: Tell us a story most people don’t know about.”

White and his team of contributors — including Rick Cleveland, Billy Watkins, Robert Khayat, Jeff Roberson — interviewed more than 100 former players and coaches, as well as children, grandchildren, and widows of former Rebels. Some of the stories uncovered by the contributors include:

• The 1907 coach who got players drunk at halftime

• The former Ole Miss player who was banned from the NFL . . . for life!

In addition to exposing hundreds of new Ole Miss football tales, the book includes an appendix with Top Ten lists, including:

• The ten greatest victories of all time

Neil White is the creative director and publisher at The Nautilus Publishing Company. He is the editor of Robert Khayat's The Education of a Lifetime and the coffee-table book Mississippians. His is also author of In the Sanctuary of Outcasts.