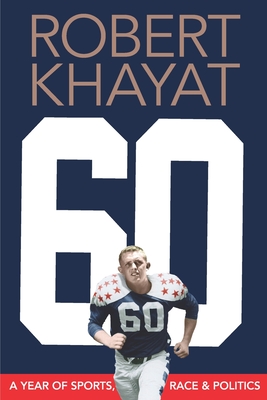 
On Our Shelves Now
(This book cannot be returned.)

In 1960, 22-year-old Robert Khayat experienced a year in which his own life, the nation, and the state of Mississippi were forever changed. The same Spring that four college students in North Carolina refused to move from a segregated lunch counter, Khayat's SEC champion Ole Miss baseball team were denied the right to play in the NCAA tournement because they might encounter a Black opponent. At the same time young John F. Kennedy became a household name, Khayat's dark-skinned father was making an unlikely ascent to become one of the most politically powerful men in Mississippi. And two high-profile segregationists -- Redskins owner George Preston Marshall and Mississippi Governor Ross Barnett -- would impact Khayat's life in ways he could never imagine. The events of 1960 set a stage for a revolution ... and Robert Khayat was living in the midst of it all.

60: A Year of Sports, Race, & Politics is the story of the year the changed everything for a nation, our culture, and a young man from Mississippi.