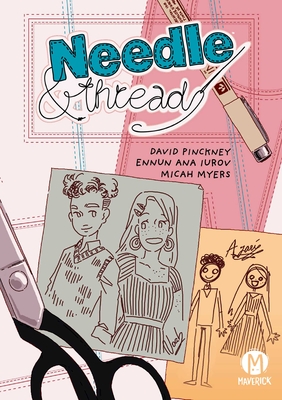 
Usually Arrives in Store in 1-5 Days
Choosing between living the life you want and living the life you’re “supposed to have” is not always an easy choice. Noah, embracing his true-self, wants to pursue a career in costume design, something his loving, public service parents would never approve of. Azarie, the perfect, model daughter of a very stern, traditional family, dreams of embracing the hobbies she secretly loves, hobbies her social circle would never abide by. The two live different lives and their social statuses keep them from ever crossing paths until they have a chance encounter that exposes some common ground: the desire to be who they truly are. Together, the two set out to put it all on the line and show everyone what they’re made of and what they want to achieve in the form of cosplay. Their growing friendship will be tested and their faith in themselves, as well as each other, will be tried. Up-and-coming writer David Pinckney (Fight Like a Girl) and first-time graphic novel artist Ennun Ana Iurov introduce a coming-of-age yarn about self-discovery, resilience, and the enduring power of having a person believe in you!
David Pinckney is a long-time comic fan whose love of the medium and his passion for storytelling fueled a desire to create comics. His days are usually spent in the pages of a comic or plotting his next story.

Ennun Ana Iurov (she/he/they) is a Romanian illustrator that is extremely pumped to have Needle & Thread professionally published under the Maverick imprint as her first dabble into young adult graphic novels. For over 6 years Ennun has created and self-published short comics and stories focusing mainly on empowering charity zines, working with organizations such as, Action Against Hunger, and others. Ennun's illustration skills have a wide range from folk tales to dream core to horror and more.

Micah Myers left college after three semesters into an Associate Degree in Graphic Design to become a professional comic book letterer. Micah has worked on comics for Image, Dark Horse, IDW, Mad Cave, Scout, Lions Forge, and many more. He lives in Portsmouth, Virginia with his wife and two kids.