Lying for Money: How Legendary Frauds Reveal the Workings of the World (Paperback) 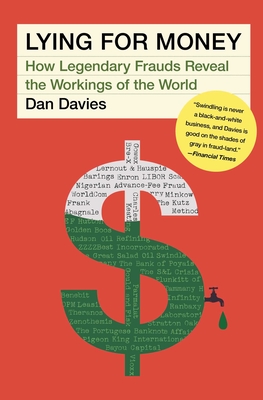 Lying for Money: How Legendary Frauds Reveal the Workings of the World (Paperback)


Usually Arrives in Store in 1-5 Days
An entertaining, deeply informative explanation of how high-level financial crimes work, written “with verve and wit” (The Sunday Times, London) by an industry insider who’s an expert in the field.

The way most white-collar crime works is by manipulating institutional psychology. That means creating something that looks as much as possible like a normal set of transactions. The drama comes later, when it all unwinds.

Financial crime seems horribly complicated, but there are only so many ways you can con someone out of what’s theirs. In Lying for Money, veteran regulatory economist and market analyst Dan Davies tells the story of fraud through a genealogy of financial malfeasance, including: the Great Salad Oil swindle, the Pigeon King International fraud, the fictional British colony of Poyais in South America, the Boston Ladies’ Deposit Company, the Portuguese Banknote Affair, Theranos, and the Bre-X scam. Davies brings new insights into these schemes and shows how all frauds, current and historical, belong to one of four categories (“long firm,” counterfeiting, control fraud, and market crimes) and operate on the same basic principles. The only elements that change are the victims, the scammers, and the terminology.

Revealing some of the most famous frauds of the modern age, Davies explains how fraud has shaped the entire development of the modern world economy. For those “who like their true-crime stories laced with economics will enjoy these forays into the dark side” (Kirkus Reviews) this is a gripping and vivid look at modern market societies.
Dan Davies is a former regulatory economist at the Bank of England and analyst for a number of investment banks. His career has seen him tackle all manner of financial crookedness, including the LIBOR and FX scandals, the collapse of Anglo Irish Bank, and the Swiss Nazi gold scandal. The author of Lying for Money, he has written for the Financial Times and The New Yorker, among other publications.
“If you want to learn to fend [off] fraud, read this. And if you want to commit fraud ... don't. But if you absolutely must, first read this.” —Nassim Nicholas Taleb

“An engaging and indispensable guide for novice fraudsters - and for those who want to keep out of their clutches.” —John Kay, author of Other People’s Money

“Swindling is never a black and white business, and Davies is good on the shades of grey in fraud-land.”—Financial Times

“Readers who like their true-crime stories laced with economics will enjoy these forays into the dark side.” —Kirkus Reviews

“Dan Davies tells all these stories with verve and wit ... Much of the book is a romp through the crimes of scoundrels - Ponzi, Madoff, Keating, the Krays ... Yet what takes it from absorbing to excellent is the author's insight. Read Lying for Money and you will look at fraud in a whole new way. Actually, you will look at every market transaction you take part in in a whole new way.” —Sunday Times (UK)