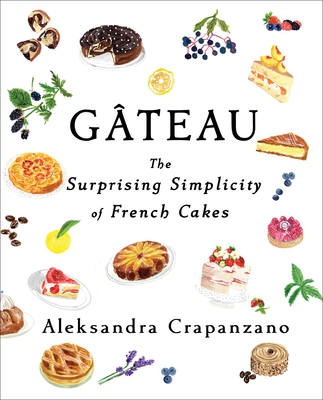 
On Our Shelves Now
James Beard Award–winning writer Aleksandra Crapanzano shares the secrets of the cakes Parisians bake at home, from the simplest yogurt cakes to a deceptively easy bûche de Noël, from yuzu madeleines to boozy flourless chocolate confections.

When we think of French desserts, we tend to imagine ornate creations and confections. Perhaps we envision a tarte Tatin, but rarely a homemade cake, whipped up on a weeknight with little fuss. But that is exactly what Parisians make and eat. Gâteaux are simple, delicious cakes, both sweet and savory, served to family and friends.

As food-columnist Aleksandra Crapanzano spent time in Parisian home kitchens, she realized that the real magic is a certain savoir-faire, that distinctly French know-how that blends style and functionality in every aspect of life. By and large, the French do not try to compete with their chefs, nor with their boulangeres and patissieres. But many Parisians are natural cooks, and most finish dinner with a little something sweet, effortlessly made and casually served. The trick is having an arsenal of recipes that, once mastered, become blueprints, allowing for myriad variations, depending on what’s in season and what’s in the cupboard. It is a practical approach, and the French are nothing if not practical. That is the savoir-faire—from tying a silk scarf just so to popping a gateau in the oven without anyone even noticing. When you know what you’re doing, there’s no need to overthink it. It looks easy because it is easy.

While the Paris culinary world is experiencing a fresh vibrancy, certain traditions remain intact yet may surprise in their modernity. For example, French cakes have less sugar. The pure taste of apples is not masked by cinnamon, and vanilla is never a given. A gateau may be lightly glazed, dusted with cocoa or confectioners’ sugar, drizzled with rose water, but rarely heavily iced. A splash of brandy, a squeeze of lemon or a thin blanket of ganache elevates even the easiest of cakes in mere minutes. And then there are savory cakes made with cheese, herbs, ham, baked into a delicious loaf. These cakes salés are ideal for picnic lunches, accompanied by a salad and a glass of Sancerre. Gâteau includes cakes for birthdays, summer feasts and winter holidays, last-minute dinner parties and school lunches, as well as beloved regional recipes and guest contributions from superstar Parisian bakers.

Practical, simple, and filled with over 100 rigorously tested recipes and charming illustrations, Gâteau celebrates every day and sometimes fanciful French cakes in all their glory.
Aleksandra Crapanzano is a James Beard–winning writer and dessert columnist for The Wall Street Journal. She is the author of The London Cookbook and Eat. Cook. LA., and her work has been widely anthologized, most notably in Best American Food Writing. She has been a frequent contributor to Bon Appetit, Food & Wine, Food52, Saveur, Town & Country, Elle, The Daily Beast, Departures, Travel + Leisure, and The New York Times Magazine.  She has years of experience in the film world, consults in the food space, and serves on several boards with a focus on sustainability.  Aleksandra grew up in New York and Paris, received her BA from Harvard and her MFA from NYU, where she has also taught writing. She is married to the writer John Burnham Schwartz, and they live in New York with their son, Garrick, and Bouvier des Flandres, Griffin.
"Offers up over 150 French cake recipes, from savory to sweet, each one eminently do-able…wherever you are. Aleksandra really understands French home baking." —David Lebovitz

"Delightfully charming . . . featuring beguiling illustrations . . . [the cakes are] unfussy and easy to throw together, and as delicious as promised." —The Washington Post

"Goes beyond recipes to make a bigger argument about how ease and simplicity define French baking culture." —The Atlantic

"A smart, charming new book on French cakes... Got an urge to bake and simultaneously submerge yourself in French culture? Gateau will enchant you." —The Boston Globe

"Want to make stunning French pastries at home with little fuss?... Flip through whimsical illustrations and charming anecdotes, and learn how to make a simple gâteux sing." —Epicurious

"Aleksandra nails what's so inimitable about the French and how they just casually throw together a showstopper." —Edible LA

"Shares the secrets to culinary savoir faire in charmingly illustrated pages... streamlined recipes rooted in classic techniques serve as blueprints for myriad variations based on the season or what’s in the cupboard." —Atlanta Journal Constitution

"Her fabulous recipes will have you wooing your friends with a whole range of sweet delicacies." —Nancy Silverton, chef and co-owner of Mozza Restaurant Group

"Chic, charming, and delectable... Everything about it—delicious writing, lyrical illustrations, and the recipes for cakes simple and seductive—conspires to bring joy. Gâteau is enchanting." —Dorie Greenspan, author of Baking with Dorie