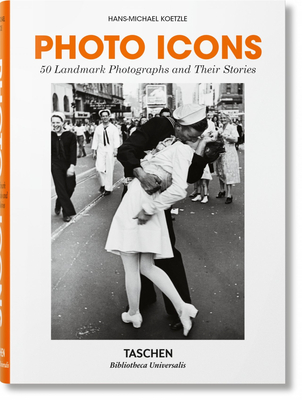 By Hans-Michael Koetzle
$20.00
Usually Arrives in Store in 1-5 Days
(This book cannot be returned.)

Photographs have a strange and powerful way of shaping the way we see the world. The most successful images enter our collective consciousness, defining eras, making history, or simply touching something so fundamentally human and universal that they have become resonant icons all over the globe. To explore this unique influence, Photo Icons puts some of the most important photographic landmarks under the microscope.

From some of the earliest photography, such as Nic phore Ni pce's 1827 eight-hour-exposure rooftop picture and Louis Daguerre's famous 1838 street scene, through to Martin Parr, this is as much a history of the medium as a case-by-case analysis of its social, historical, and artistic impact. We take in experimental Surrealist shots of the 1920s and the gritty photorealism of the 1930s, including Dorothea Lange's Migrant Mother.

We witness the power-makers (Che Guevara) and the heartbreakers (Marilyn Monroe) as well as the great gamut of human emotions and experiences to which photography bears such vivid witness: from the euphoric Kiss in Front of City Hall (1950) by Doisneau to the horror of Nick Ut's Napalm Against Civilians showing nine-year-old Phan Thi Kim Ph c running naked toward the camera from South Vietnamese napalm.