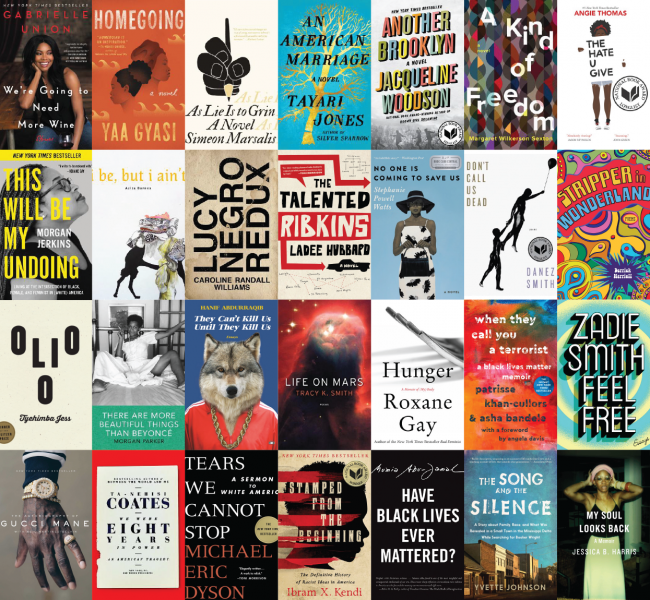 See our list for a selection of books written by African American writers who should be on your shelf.

FICTION
An American Marriage by Tayari Jones
Oprah loves this book about a love triangle after a wrongly accused prison conviction. Don’t miss our event when Tayari Jones reads on February 28th.

We’re Going to Need More Wine by Gabrielle Union
A thought-provoking and witty collection of stories about all of the beautiful and ugly parts of life as an African American woman. And yes, you will need more wine.

As Lie Is To Grin by Simeon Marsalis
Simeon Marsalis' debut coming-of-age tale, which was shortlisted for the 2017 Center for Fiction First Novel Prize. Signed copies.

The Talented Ribkins by Ladee Hubbard
This has been a staff favorite ever since she visited last August. Signed copies available.

A Kind of Freedom by Margaret Wilkerson Sexton
A 2017 National Book Award nominee which explores love within the confines of class divisions in New Orleans.

No One is Coming to Save Us by Stephanie Powell Watts
A revelatory debut from an insightful voice about an extended African American family and their colliding visions of the American Dream.

The Hate U Give by Angie Jackson
After 16 year old Starr witnesses the fatal shooting of a childhood friend by a police officer, her life changes irrevocably. This compelling story of love, anger, and justice is sure to be remembered for years to come. - ST

POETRY
There Are More Beautiful Things Than Beyoncé by Morgan Parker
Morgan Parker’s collection of poems with riffs on Beyoncé and blackness.

Olio by Tyehimba Jess
Winner of the 2017 Pulitzer Prize in Poetry which examines the lives of mostly unrecorded African American performers directly before and after the Civil War up to World War I.

i be, but i ain’t by Aziza Barnes
Former University of Mississippi MFA student Aziza Barnes’ provocative, inventive, and brilliant debut collection.

Life on Mars by Tracy K. Smith
With allusions to David Bowie and interplanetary travel, Life on Mars imagines a soundtrack for the universe to accompany the discoveries, failures, and oddities of human existence. Winner of the 2012 Pulitzer Prize in Poetry.

They Can’t Kill Us Until They Kill Us by Hanif Willis-Abdurraqib
Music is church and a vehicle for Hanif Abdurraqib to explore race and identity.

Feel Free by Zadie Smith
A new collection of essays from Zadie Smith, one of the most beloved authors of her generation.

Hunger by Roxane Gay
New York Times bestselling author Roxane Gay’s memoir about being a fat black woman who takes up more space than a person is “allowed.”

My Soul Looks Back by Jessica B. Harris
Renowned food writer Jessica B. Harris’s memoir about growing up in the midst of giants such as Maya Angelou, James Baldwin, and other members of the black intelligentsia. Signed copies available.

This Will Be My Undoing by Morgan Jerkins
Living at the intersection of black, female, and feminist in (white) America.

The Song and the Silence by Yvette Johnson
Yvette Johnson travels to the Mississippi Delta to uncover the true story of her late grandfather Booker Wright, who was murdered in 1966 after a candid interview for an NBC documentary.

The Autobiography of Gucci Mane by Gucci Mane
The highly anticipated memoir from Gucci Mane, "one of hip-hop's most prolific and admired artists" (The New York Times).

When They Call You a Terrorist by Patrisse Khan-Cullors & Asha Bandele
A poetic and powerful memoir about what it means to be a black woman in America—and the co-founding of a movement that demands justice for all in the land of the free.

Have Black Lives Ever Mattered? By Mumia Abu-Jamal
Mumia Abu-Jamal gives voice to the many people of color who have fallen to police bullets or racist abuse, and offers the post-Ferguson generation advice on how to address police abuse in the United States.

Tears We Cannot Stop by Michael Eric Dyson
"One of the most frank and searing discussions on race...a deeply serious, urgent book, which should take its place in the tradition of Baldwin's The Fire Next Time and King's Why We Can't Wait." —The New York Times Book Review

Stamped from the Beginning by Ibram X. Kendi
In this deeply researched and fast-moving narrative, Kendi chronicles the entire story of anti-black racist ideas and their staggering power over the course of American history.

How to Slowly Kill Yourself and Others by Kiese Laymon
Kiese Laymon writes some of the most powerful, stirring, and important essays in American writing.