Dominic Smith with THE LAST PAINTING OF SARA DE VOS 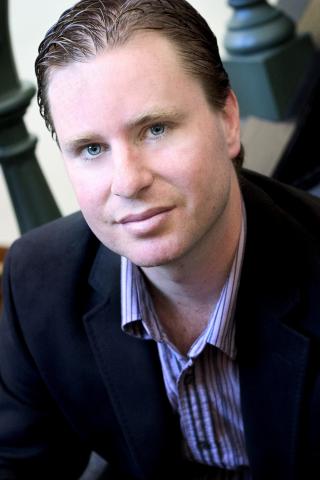 Dominic Smith grew up in Australia and now lives in Austin, Texas. He's the author of three novels: "Bright and Distant Shores", "The Beautiful Miscellaneous", and "The Mercury Visions of Louis Daguerre". His short fiction has been nominated for a Pushcart Prize and has appeared widely, including in "The Atlantic", "Texas Monthly", and the "Chicago Tribune"'s Printers Row Journal. He has been a recipient of a Literature Grant from the Australia Council for the Arts, a Dobie Paisano Fellowship, and a Michener Fellowship. He teaches writing in the Warren Wilson MFA Program for Writers.

Amsterdam, 1631: Sara de Vos becomes the first woman to be admitted as a master painter to the city's Guild of St. Luke. Though women do not paint landscapes (they are generally restricted to indoor subjects), a wintry outdoor scene haunts Sara: She cannot shake the image of a young girl from a nearby village, standing alone beside a silver birch at dusk, staring out at a group of skaters on the frozen river below. Defying the expectations of her time, she decides to paint it.

New York City, 1957: The only known surviving work of Sara de Vos, "At the Edge of a Wood," hangs in the bedroom of a wealthy Manhattan lawyer, Marty de Groot, a descendant of the original owner. It is a beautiful but comfortless landscape. The lawyer's marriage is prominent but comfortless, too. When a struggling art history grad student, Ellie Shipley, agrees to forge the painting for a dubious art dealer, she finds herself entangled with its owner in ways no one could predict.

Sydney, 2000: Now a celebrated art historian and curator, Ellie Shipley is mounting an exhibition in her field of specialization: female painters of the Dutch Golden Age. When it becomes apparent that both the original At the Edge of a Wood and her forgery are en route to her museum, the life she has carefully constructed threatens to unravel entirely and irrevocably.

The Last Painting of Sara de Vos: A Novel (Hardcover)