George Saunders with LINCOLN IN THE BARDO 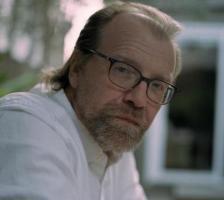 The captivating first novel by the best-selling, National Book Award nominee George Saunders, about Abraham Lincoln and the death of his eleven year old son, Willie, at the dawn of the Civil War.

On February 22, 1862, two days after his death, Willie Lincoln was laid to rest in a marble crypt in a Georgetown cemetery. That very night, shattered by grief, Abraham Lincoln arrives at the cemetery under cover of darkness and visits the crypt, alone, to spend time with his son’s body. Set over the course of that one night and populated by ghosts of the recently passed and the long dead, Lincoln in the Bardo is a thrilling exploration of death, grief, the powers of good and evil, a novel - in its form and voice - completely unlike anything you have read before. It is also, in the end, an exploration of the deeper meaning and possibilities of life, written as only George Saunders can: with humor, pathos, and grace.

*George Saunders wants you to read with him to best capture the many voices in this brilliant new novel. Pre-order now for a chance to be a reader.*

George Saunders is the author of eight books, including the New York Times bestsellers Congratulations, by the way and Tenth of December, an essay collection, The Braindead Megaphone, and the critically acclaimed collections CivilWarLand in Bad Decline, Pastoralia, and In Persuasion Nation. In 2006, he was awarded a MacArthur fellowship. He teaches in the Creative Writing Program at Syracuse University.

Lincoln in the Bardo: A Novel (Hardcover)