James Meredith signs A MISSION FROM GOD: A MEMOIR AND CHALLENGE FOR AMERICA 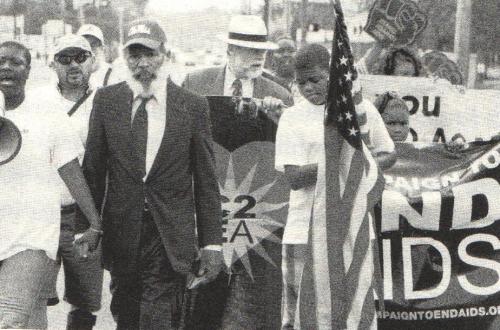 Today, I'm still marching against fear. In 2008, I was invited to attend the Obama-McCain
debate at Ole Miss as an honored guest. Instead, I joined a 170-mile walk to fight AIDS,
above. I am devoting the rest of my life to improving the public education of America's children
Photo by Matt Heindl, Jackson Free Press

Opening with a riveting account of his 1966 assassination attempt 2 miles outside Hernando, Mississippi, James Meredith's new book, A Mission From God: A Memoir and Challenge for America, rarely loses its grip on the reader captured by the voice that admits, "I befuddle people," avering that "I refused to be forced into a special category where I am expected to behave in certain ways and hold certain beliefs." The author (with William Doyle) ranges across a spectrum of history and events, including his genealogical history (an especially fine portrayal of his mother and father), his military career, his spiritual connection to Japan, his encounters and friendships with Martin Luther King, Jr., Medgar Evers, and others, the crisis surrounding his desegregation of Ole Miss (and encounter with the white woman who was in love with him), his career with Jesse Helms, all the while espousing his core beliefs about humanity, politics, and his principles of American citizenship. While the enigma of James Meredith ultimately remains, we know more of this man now than we ever have through the blunt honesty of this book, portrayed by the amazing and amiable character of James Meredith, as well as the utterly sensible and noble challenge that arrives at the end of the book. James Meredith will be at Square Books August 30 at 5 p.m. to sign copies of A Mission from God. RH

Journalist and professor Joe Atkins will interview James Meredith briefly and moderate a question and answer session at 5:30 Thursday, August 30, during Mr. Meredith's appearance  in conjunction with his book, A Mission From God.