Jessica B. Harris with MY SOUL LOOKS BACK 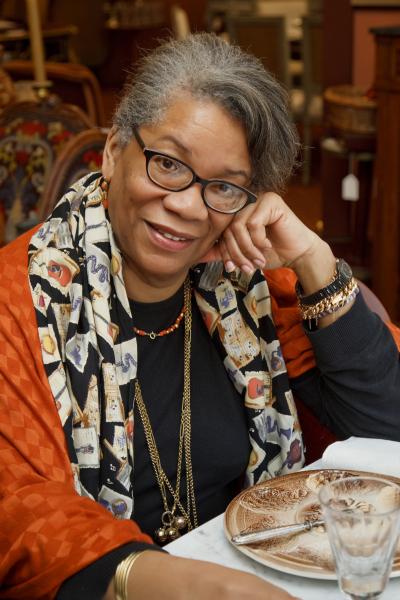 In this captivating new memoir, award-winning writer Jessica B. Harris recalls a lost era—the vibrant New York City of her youth, where her social circle included Maya Angelou, James Baldwin, and other members of the Black intelligentsia.

In the Technicolor glow of the early seventies, Jessica B. Harris debated, celebrated, and danced her way from the jazz clubs of the Manhattan's West Side to the restaurants of the Village, living out her buoyant youth alongside the great minds of the day—luminaries like Maya Angelou, James Baldwin, and Toni Morrison. My Soul Looks Back is her paean to that fascinating social circle and the depth of their shared commitment to activism, intellectual engagement, and each other.

Harris paints evocative portraits of her illustrious friends: Baldwin as he read aloud an early draft of If Beale Street Could Talk, Angelou cooking in her California kitchen, and Morrison relaxing at Baldwin’s house in Provence. Harris describes her role as theater critic for the New York Amsterdam News and editor at then burgeoning Essence magazine; star-studded parties in the South of France; drinks at Mikell’s, a hip West Side club; and the simple joy these extraordinary people took in each other’s company. The book is framed by Harris’s relationship with Sam Floyd, a fellow professor at Queens College, who introduced her to Baldwin.

More than a memoir of friendship and first love My Soul Looks Back is a carefully crafted, intimately understood homage to a bygone era and the people that made it so remarkable.

About the Author
Jessica B. Harris is one of a handful of African Americans who have achieved prominence in the culinary world. She holds a PhD from NYU, teaches English at Queens College, and lectures internationally. The author of the memoir My Soul Looks Back as well as twelve cookbooks, her articles have appeared in Vogue, Food & Wine, Essence, and The New Yorker, among other publications; she has made numerous television and radio appearances and has been profiled in The New York Times. Considered one of the preeminent scholars of the food of the African Diaspora, Harris has been inducted into the James Beard Who’s Who in Food and Beverage in America, received an honorary doctorate from Johnson & Wales University, holds awards from sources too numerous to note, and recently helped the Smithsonian Museum of African American History and Culture to conceptualize its cafeteria.

My Soul Looks Back: A Memoir (Hardcover)