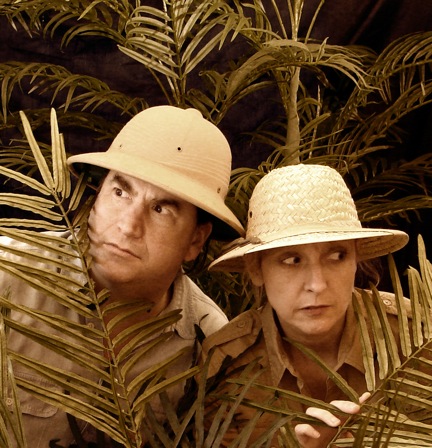 Jon Voelkel grew up in Peru, Costa Rica, and Colombia, all the while dreaming of a boring life in suburbia. Eventually, having survived monkey stew, an attack by giant rats, and a plane crash in the jungle, he rolled up his hammock and decamped to Europe.

Meanwhile, growing up in a sedate seaside town in northern England, Pamela Craik Voelkel was dreaming of travel and adventure. The pair met in London, where they both worked in advertising. They went on to help found an award-winning agency, for which Jon was named one of the fifty most creative minds in Britain by the Financial Times. The authors' first book in the Jaguar Stones series, Middleworld, was an Al Roker Book Club pick.

The Voelkels now live in Vermont with their three children. You can visit them online at www.jaguarstones.com.

The epic conclusion to the exciting Jaguar Stones series and a rip-roaring adventure into the heart of America!

With his parents in jail and the Maya Death Lords in possession of all five Jaguar Stones, fourteen-year-old Max Murphy is pretty sure that he'll never get to leave the rainforest.

But the Lords of Death have a problem--a new king calling himself Great Sun claims to have the Jaguar Stones, too. And they want Max to prove the guy's a fraud. Or else.

Now, Max, and Lola, the mysterious girl who befriends him, are off on another wild adventure that will take them from Central America to New Orleans and up the Mississippi to the lost city at the heart of America's past.

But one thing Max should have learned after all of this dealings with the Death Lords -- they never keep their promises.