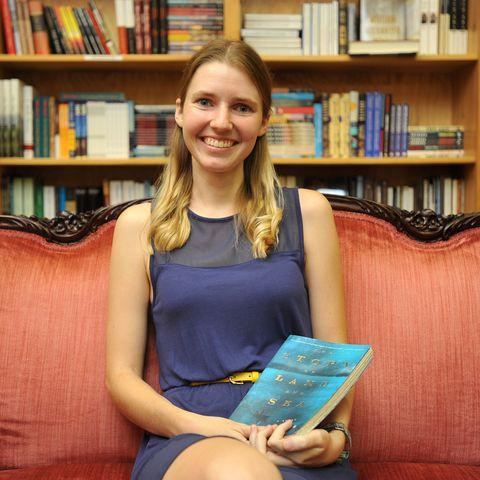 Katy Simpson Smith was born and raised in Jackson, Mississippi. She attended Mount Holyoke College and received a PhD in history from the University of North Carolina at Chapel Hill and an MFA from the Bennington Writing Seminars. She is the author of a study of early American motherhood, We Have Raised All of You: Motherhood in the South, 1750 1835, and a novel, The Story of Land and Sea. She lives in New Orleans.

From the author of the highly acclaimed The Story of Land and Sea comes a captivating new novel, set in the late-eighteenth-century American South, that follows a singular group of companions an escaped slave, a white orphan, and a Creek Indian who are being tracked down for murder.

In 1788 three men converge in the southern woods of what is now Alabama. Cat, an emotionally scarred white man from South Carolina, is on the run after abandoning his home. Bob is a talkative black man fleeing slavery on a Pensacola sugar plantation. Istillicha, edged out of his Creek town's leadership, is bound by honor to seek retribution.

In the few days they spend together, the unlikely trio commits a shocking murder that soon has the forces of the law bearing down upon them. Sent to pick up their trail, a probing French tracker named Le Clerc must decide which has a greater claim: swift justice or his own curiosity about how three such disparate, desperate men could act in unison.

Katy Simpson Smith skillfully brings into focus men whose lives are both catastrophic and full of hope and illuminates the lives of the women they left behind. Far from being anomalies, Cat, Bob, and Istillicha are the beating heart of the new America that Le Clerc struggles to comprehend. In these territories caught among European, American, and Native nations, a wilderness exists where four men grapple with the importance of family, the stain of guilt, and the competing forces of power, love, race, and freedom profound concerns that continue to haunt us today.