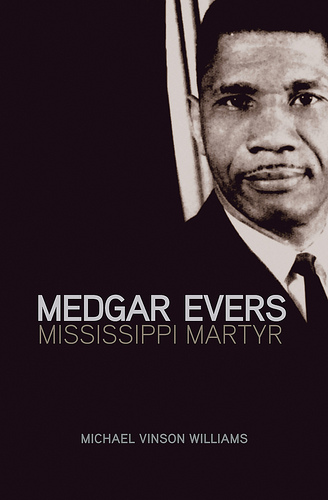 Medgar Evers: Mississippi Martyr was featured on the cover of the latest Dear Reader newsletter. You can download it here.

Michael Vinson Williams, who received his graduate degrees at Ole Miss and now teaches at Mississippi State, has spent years researching and writing “the first scholarly, full-length treatment of this iconic Mississippi civil rights leader,” according to John Kirk.  John Dittmer hails Williams as he “captures Medgar Evers in all his complexity…in this important book.”  There are numerous heroes and martyrs of the Civil Rights Movement, and many from Mississippi, such as James Meredith, Fannie Lou Hamer, Emmett Till—an endless list. Their legacies were defined in a violent and complex time by combinations of courage, intelligence, and persistence, or caution, anger, or chance. None, however, seemed to possess the rare qualities that Medgar Evers had, and no one life became, at least at its time, more tragic than that of Evers, shot in the back in front of his wife and children, at his own home, by a racist assassin just at the point when this fiercely brave and brilliant activist was beginning to be depended upon, and broadly recognized for, his tremendous leadership.  The first NAACP Mississippi Field Secretary bridged the firebrand militancy of Malcolm X and the patience pacifism of Martin Luther King, and his loss remains with us to this day.  RH

About Defending White Democracy:  After the Supreme Court ruled school segregation unconstitutional in 1954, southern white backlash seemed to explode overnight. However, Ward argues that southern conservatives began mobilizing against civil rights some years earlier, when the New Deal politics of the mid-1930s threatened the monopoly on power that whites held in the South. Ward uncovers a parallel history of segregationist opposition that mirrors the new focus on the long civil rights movement.