An "Off" Night with Kevin Sampsell, Mary Miller & Claudia Smith 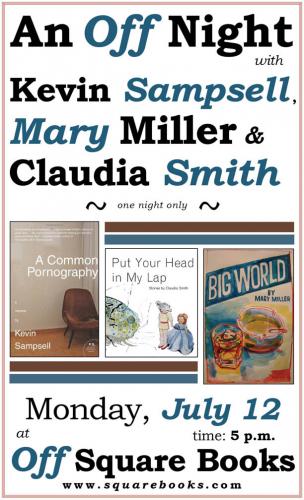 Another "Off" Night at Off Square Books featuring readings by Kevin Sampsell, Mary Miller, and Claudia Smith.

In 2008, Kevin Sampsell's estranged father died of an aneurysm. When he returned home to Kennewick, Washington, for the funeral, Kevin's mother revealed to him disturbing threads in their family history — stories of incest, madness, betrayal, and death. In A Common Pornography, he tells his family's unforgettable story — from his mother's first tumultuous marriages and his father's physical, pyschological, and sexual abuse of his half-sister to his own tales of first jobs, first bands, and first loves in the Pacific Northwest in the '70s and '80s.

One of Sampsell's previous books was written as a kind of "memory experiment," in which he recollected luminous details from his childhood in independently amusing chapters. Employing the same form of memoir in A Common Pornography, he intertwines the tragic with the everyday, the dysfunctional with the fun, lending the book its undeniable, unsensationalized reality. He captures the many shades and the whole of the Sampsell family — both its tragedy and its resiliency.

Also joining Kevin will be Mississippi native Mary Miller. Her book, Big World, from Hobart's Long Drive/Short Flight series has been one of our favorite books at Square Books. Everybody that buys it seems to love it. And it fits perfectly in your pocket. Mary is a writer that we will be hearing from in the future. Her stories are just amazing.

Mary's stories have appeared in Oxford American, Mississippi Review, Black Clock, Kitty Snacks, and Quick Fiction, and are forthcoming in New Stories From the South 2008, Barrelhouse, and Hobart #9.

Lastly, joining Kevin and Mary, is Claudia Smith. Claudia lives in Hattiesburg, Mississippi (where Mary lives too!) and teaches at the University of Southern Mississippi.  Claudia has two chapbooks out. Her latest is Put Your Head in My Lap (Future Tense Press), of which Mary Miller said, "is a vivid book of short fiction that both inspires me and makes me feel inadequate. She takes the everyday--cooking dinner, a stained sink, physical attraction--and renders them in such precise detail, that even 'a collection of soiled fingernails in a shot glass' becomes almost unbearably beautiful."

This will be an event not to miss. So come early and hear some of today's best new writers read from their latest works.