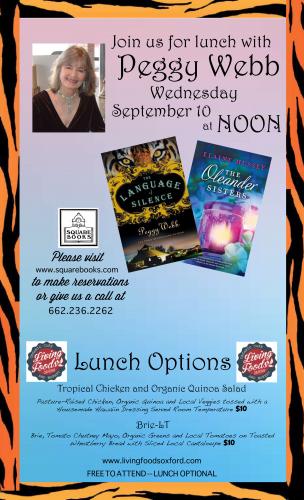 DECRIPTION FOR THE LANGUAGE OF SILENCE
Following in the footsteps of her tiger-taming grandmother, a woman flees her abusive husband to join the circus in this masterful, heartfelt work of women's fiction. Peggy Webb won raves for her debut novel, The Tender Mercy of Roses, with novelist Pat Conroy calling her "a truly gifted writer." Now Webb has crafted a poignant portrayal of a woman on the edge seeking solace in the past. Nobody in the family talks about Ellen's grandmother Lola, who was swallowed up by the circus and emerged as a woman who tamed tigers and got away scot-free for killing her husband. When Ellen's husband, Wayne, beats her nearly to death, she runs to the only place she knows where a woman can completely disappear--the same Big Top that once sheltered her grandmother. Though the circus moves from one town to the next, Wayne tracks it, and Ellen, relentlessly. At the same time, Ellen learns more about her feisty, fiery relative, and the heritage that is hers for the taking--if she dares. With her violent husband hot on her trail, Ellen must learn to stand up and fight for herself, to break the cycle of abuse, and pass down a story of love and redemption to her children.
*"writing as Anna Michaels

DESCRIPTION OF THE OLEANDER SISTERS
An emotionally riveting tale of the bonds of family and the power of hope in the sultry Deep South. In 1969, the first footsteps on the moon brighten America with possibilities. But along the Mississippi Gulf Coast, a category five storm is brewing, and the Blake sisters of Biloxi are restless for change. Beth "Sis" Blake has always been the caretaker, the dutiful one, with the weight of her family's happiness--and their secrets--on her shoulders. She dreams of taking off to pursue her own destiny, but not before doing whatever it takes to rescue her sister.
Emily Blake, an unwed mother trying to live down her past, wants the security of marriage for the sake of her five-year-old son, Andy. But secure is the last thing she feels with her new husband. Now she must put aside pride, and trust family to help her find the courage to escape. With Hurricane Camille stirring up havoc, two sisters--each desperate to break free--begin a remarkable journey where they'll discover that in the wake of destruction lies new life, unshakable strength and the chance to begin again. Dreams are reborn and the unforgettable force of friendship is revealed in The Oleander Sisters, an extraordinary story of courage, love and sacrifice.

The Language of Silence (Paperback)