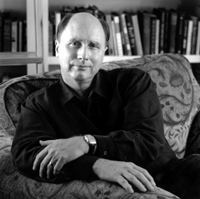 Pulitzer Prize winner Robert Olen Butler has written fiction about farranging topics including hell, extraterrestrials, and the Vietnam War. With A Small Hotel, his twelfth novel, he has turned his attention to a new topic—the complexities of a male-female relationship—and delivers a beautifully told story of love, loss, and redemption.

Set in contemporary New Orleans but working its way back in time, A Small Hotel chronicles the relationship between Michael and Kelly Hayes, who have decided to separate after twenty years of marriage. The book begins on the day that the Hays are to finalize their divorce. Kelly is due to be in court, but instead she drives from her home in Pensacola, Florida, across the panhandle to New Orleans and checks into Room 303 at the Olivier House in the city’s French Quarter—the hotel where she and Michael fell in love some twenty years earlier and where she now finds herself about to make a decision that will forever affect her, Michael, and their nineteen-year-old daughter, Samantha.

Butler masterfully weaves scenes of the present with memories from both the viewpoint of Michael and Kelly—scenes that span twenty years, taking the reader back to critical moments in the couple’s relationship and showing two people deeply in love but also struggling with their own insecurities and inabilities to express this love.

An intelligent, deeply moving, and remarkably written portrait of a relationship that reads as a cross between a romance novel and a literary page turner, A Small Hotel is a masterful story that will remind readers once again why Robert Olen Butler has been called the “best living American writer” (Jeff Guinn, Fort Worth Star-Telegram).
Event address:
160 Courthouse Sq
38655-3914 Oxford
us