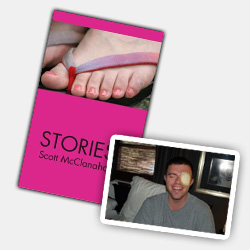 Here's a review by Sam Pink that was featured on htmlgiant.com:

Scott McClanahan is from West Virginia, which, as he has to explain to another person in STORIES II, is not just a part of Virginia, but an entire state of its own.

Scott wears suits from Sears.  He came to Chicago last summer and we read together and we drank beer out of a glass boot at this German restaurant.  We saw German Larry Bird play in a polka band.  Scott also showed me his impression of a person laughing while typing a mean comment on the internet.

All of this, plus how much I liked his first book, STORIES, and his new book, STORIES II, has solidified Scott McClanahan as a friend and as an author who I will continue to read.  He writes unselfconsciously minimalist stories about people from West Virginia.  Recently, he sent me his latest collection, called STORIES II, from Six Gallery Press.

STORIES II returns to the themes of STORIES:  West virginia, being a person around other people, and figuring things out when you thought they were already figured out.

STORIES II also returns to the signature tone of STORIES I.  He writes in a way that is conscious of both his own absurdity and that of others, without overdoing either.  He makes it really easy to like the narrator and to learn from the narrator’s experiences.  Scott also knows how to balance humor and sadness.

In STORIES II, we meet a retarded man selling newspapers. We meet the “fever” of suicide.  We meet Scott working as a telemarketer, talking to a man who weeps and begs him to stay on the phone.  And we meet all of it through the character Scott McClanahan.  He writes himself as a character really well.  I think what makes it work, for me, is that he is able to go in and out of being purely subjective, to realizing things outside of himself.  He writes familiar situations with unfamiliar outcomes.

Scott’s style is the most lively minimalism I have read.  Many sentences begin with “and” or “so” and contain the word “just.”  The result is a really smooth minimalism.  Not a minimalism that recognizes itself, but one that just happens.  If you are ever able to see Scott read, you will understand what I mean.  Many of his stories begin as though you just walked up to a conversation.  Not, “in the middle of things” but, “in the middle of thoughts.”  For example, one story begins, “I’ve stolen things before though.”  The result is that it’s like you are put into an already-begun conversation.