Tim Duffy signs WE ARE THE MUSIC MAKERS! 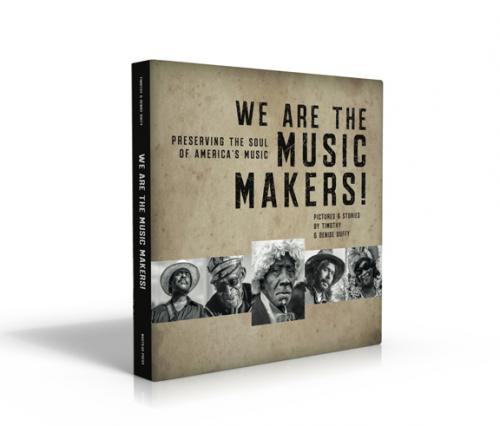 Tim Duffy knew from an early age that he wanted to go out into the world and meet artists like Doc Watson and Etta Baker. When he entered Warren Wilson College in Swannanoa, North Carolina, Tim was thrilled to join the Appalachian Music Crew, documenting local musicians. Tim has been seeking out musicians performing traditional music ever since. He records them, talks with them, photographs them, and learns their stories.

In 1994, Tim founded Music Maker Relief Foundation with wife Denise while living in Winston-Salem, NC. Tim and Denise were deeply disturbed by the poverty they witnessed among the community of roots musicians they met. Music Maker was created to assist these artists in meeting basic needs, documenting their art and earning an income from their music.

As Tim and Denise continued growing the foundation, they met many artists performing traditional music who needed help. Thus, Music Maker has continued for twenty years, booking artists gigs, recording CDs, paying for heating oil, fixing cars and so much more. Tim serves as Executive Director of the Foundation, with Denise as the Managing Director. Together, they strive to preserve Southern traditional music by partnering with the artists who make it. We Are the Music Makers is Tim’s second book, featuring photos, stories and songs from the musicians he has partnered with over the past twenty years.

“We Are The Music Makers: Preserving The Soul Of America’s Music,” written by Timothy and Denise Duffy, features over 65 photographs taken by Tim Duffy over twenty years along with stories and songs.

Of the book, B.B. King said, “We are the Music Makers highlights an essential part of our culture, providing us a glimpse into the lives of the amazing, and often little known, musicians of the American
South. Tim Duffy has taken every opportunity to sustain a dimension of Blues culture that could easily be lost forever, and nowhere is that more apparent than in his new book.”

The companion CD both compliments the book and stands entirely on its own. The two discs are packed with music showcasing the work we have done with artists over our 20-year history. We Are the Music Makers' 20th Anniversary CD is something for everyone, from the most ardent music lover to newcomers to the MMRF mission.

We Are the Music Makers!