Yvette Johnson with THE SONG AND THE SILENCE 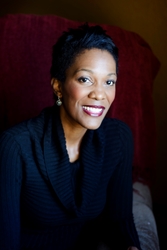 In this moving memoir, Yvette Johnson travels to Mississippi to uncover the true story of her grandfather and why he was murdered—a case that became the basis for the documentary Booker’s Place: A Mississippi Story, which the Los Angeles Times called “a powerful personal portrait.”

“Have to keep that smile,” said Booker Wright in the 1966 NBC documentary Mississippi: A Self-Portrait. At the time, Wright was a waiter in a whites-only restaurant and a local business owner who would become an unwitting icon of the Civil Rights Movement. For he did the unthinkable: before a national audience, he described what life was truly like for the black people of Greenwood, Mississippi.

Shortly after these remarks aired on TV, life for Booker took a turn for the worst.

And so began the story that has inspired Yvette Johnson, Wright’s granddaughter, to explore her grandfather's life—as well as her own feelings on race—in this fascinating memoir. Born a year after Wright’s death and raised in a wealthy San Diego neighborhood, Johnson admits she never had to confront race the way southern blacks did in the 1960s. Compelled to learn more about her roots, she travels back to Greenwood, Mississippi, a beautiful southern town steeped in secrets and a scarred past, to interview family members about the real Booker Wright. As she uncovers her grandfather's fascinating story and gets closer to the truth behind his murder, she also confronts her own conflicted feelings surrounding race, family, forgiveness, and faith.

Told with powerful insights and harrowing details of Civil Rights–era Mississippi, The Song and the Silence is an amazing chronicle of one woman’s five-year journey in pursuit of the past—and hope for tomorrow.

Yvette Johnson is a writer, film producer, and speaker. She coproduced the documentary Booker’s Place: A Mississippi Story, which premiered at the 2012 Tribeca Film Festival.