Great success for TO KILL A MOCKINGBIRD public reading 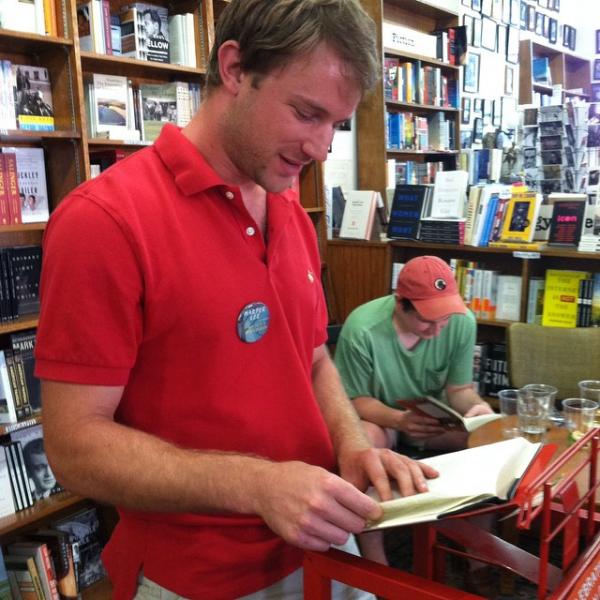 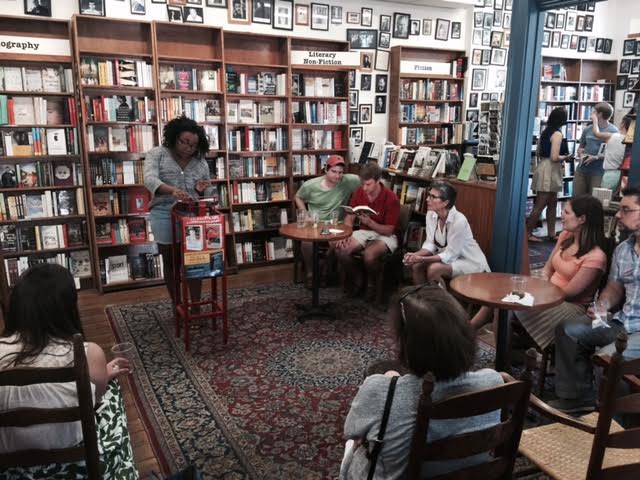 Saturday was a fine, fun day upstairs at Square Books, where, beginning at precisely 9:00 a.m., some sixty-odd readers read without stopping from Harper Lee’s classic, To Kill a Mockingbird, in ten minutes shifts until they had finished at 7:00 p.m.  Who went first?  Susan Robinson.  Why Susan Robinson?  Naturally, because she signed up to go first and drove 550 miles from Oklahoma City just to do so.   Like many others, Susan hung around for much of the day, dropping in from time to time to see what Scout and them are up to now.  You can see pictures of every reader on our Facebook page, with a quote from some part of the passage read  by each reader.

Many old Mockingbird and Square Books friends, like Ann O’Dell and Eunice Benton, were great readers.   Several were obviously pros, like Alex Mercedes and Ricardo Carroll, who have these great booming or projecting voices, and read flawlessly.   Tom Franklin, reading the passage when the jury’s decision is announced, became a bit emotional, as did we all.  I didn’t get to hear everyone, but I can say that Abigail Meisel, Mary Edith Walker, and Susan Hayman are all terrific readers. One reader got a solid round of applause, young Ze Carroll, who appeared to be about eleven or twelve years old.  His dad stood behind him to help pronounce a few words he probably had never encountered, not to mention the dialog and Southern colloquialisms, but young Ze read marvelously.  Another really fine reader, Bo Wilson, arrived here at 7:30 a.m. and, not counting a lunch break, didn’t leave until we were done, at 7:00 p.m.

Special thanks to Lyn Roberts, for organizing and supervising, to Norma Barksdale, the same, including the great Mockingbird #tkam excerpts on Facebook, and to all the other readers and to the other booksellers – many of whom became readers at the end, as our estimate for finishing time was a bit short.

Several people suggested this event was so much fun we ought to do it again with some other book.  So we may.  National Public Radio had someone there at 9 a.m. to record several readers – and afterwards, ambush them with questions regarding Atticus Finch’s racism that purportedly reveals itself in Go Set a Watchman, which most of them hadn’t heard about and came from “an exclusive review” from the New York Times’ Michiko Kakutani on July 10, meaning we had only Lord Michiko to believe in for four days.    We agree with the sentiments of Mary Badham, who played Scout in the movie verson of TKAM and was later quoted in the Times (perhaps atoning for Kakutani's earlier alarm), "I wish the press had given the book a chance to be read before it was discussed."   There was a time when the press never preempted a book's publication -- no publisher would allow it, but the internet, perhaps, has changed that.   And one has to reckon an "exclusive" arrangement implies the Times giving something up something of value in return.

The book has been tightly embargoed and we were not allowed to allow other people to read it until Tuesday, July  14.  It’s almost enough to make one run screaming home to watch CNN’s 24-hour “news” cycle of, speaking of racists, Donald Trump’s reality campaign. The Lafayette County – Oxford Library will show the movie version of TKAM tonight, Monday, July 13, beginning at 5:30, and we will open Square Books’ doors on Tuesday at 7:30 a.m., with coffee and donuts, for everyone who has come to get his or her or their copy of Go Set a Watchman. And, a related and recent addition to our event schedule:   "How Did Go Set a Watchman Change Our Notions about Scout, Atticus, and Harper Lee?"  -- a discussion forum for readers of Harper Lee's books -- will take place at Off Square Books 5:00 p.m. Thursday, August 6.