Last week was one of the all-time best (and busiest) in Square Books Jr. history

We were honored by five best-selling authors/illustrators visiting during the week which, incidentally, led up to the celebration of the thirty-second birthday of Square Books!

On Thursday, September 8, Loren Long came for story time to read his Otis and the Tornado, the follow-up book to his best-selling Otis.  Long is also known for his earlier work illustrating books by Frank McCourt (Angela & Baby Jesus) and Barack Obama (Of Thee I Sing: A Letter to My Daughters).  Otis, a plucky tractor, is becoming as beloved as Ferdinand the Bull and Katy and the Big Snow.  After reading to the children and signing lots of copies, we went over to Oxford's City Hall, where Mr. Long found the John McCrady painting in Mayor Pat's office eerily evocative of landscapes in Otis.

At the same time that Mr. Long was captivating the toddler crowd, Lincoln Peirce was inspiring the upper elementary  and middle-grade students at Regents to become cartoonists and teaching them how to draw Big Nate from his cartoons and books.  The kids loved him as h

e led them through his scribble game, and the imaginative energy was amazing!

Taking a lunch break before signing that afternoon at Jr, we all met Lincoln Peirce and headed to Ajax for lunch. Turns out they both worked on farms in their youth, so they really enjoyed the country fried steak and talked about tractors and childrens books.  Mr. Peirce was especially touched when another diner stopped by the table to tell him how much she and her son appreciate his books.

We kept up the lively pace on Friday with a signing with the enthusiastic and totally engaging Ilsa Bick.  A doctor, film critic, blogger, former Air Force major, and now full-time author, Ilsa Bick is a fascinating person and her latest book ASHES is a great teen read appropriate for adults as well.

On Saturday, September 10, Off Square Books was the site for one of the most dynamic children's events in the history of Square Books, when illustrator James Dean and author Eric Litwin arrived in a long black car and began unpacking their music and art supplies.  Eager children and parents who had been waiting for up to an hour watched as Eric got out his guitar and set up his sound equipment while James unfolded an easel and laid out his paint supplies on a cloth on the floor.  Eric wore glasses and was dressed casually, looking pretty much like the schoolteacher he used to be, and James had a beard and long, straight hair and was wearing a gray Pete The Cat T-shirt.  Many noticed that James's shoes were blue.  (James was once an electrical engineer!) 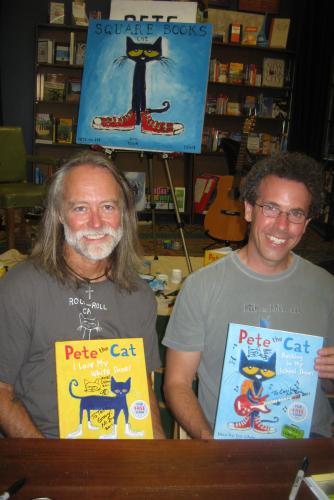 Before long the room had filled up.  James placed a square canvas on his easel and started painting.  Eric approached the mic and greeted the crowd enthusiastically.  James said how happy they were to be here, explaining that he was from Alabama.  Eric soon began to talk about Pete the Cat and their new book, Rocking in My School Shoes, breaking into story and song, and soon all the children and the adults were clapping and jumping and finishing the lyrics to "I Love My White Shoes," which the children and many of the rest of us all knew by heart from having heard it thousands of times over the past two years at Square Books, Jr.  Was anyone in this crowd bored?  "Oh goodness, no!"

As Mr. Eric led us in song, James's painting took shape -- a dark blue Pete the Cat in red shoes surrounded by a light blue background and, at the top in print letters, "SQUARE BOOKS CAT."  (The painting is at the frame shop and soon will reside at Square Books Jr for all to see.)  The storytelling, singing, and dancing (and clapping and jumping and shouting) went on nearly an hour, and we all soon understood where all the energy, fun, and wisdom behind Pete The Cat comes from, why it is the current number-one bestselling children's book in the nation, why Pete The Cat is now -- at least at Square Books Jr -- a legend in his own time, and why, of course, "it's all good." 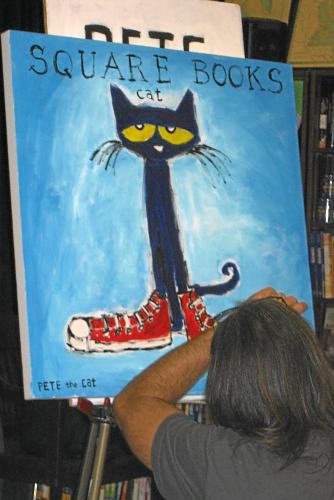 After signing many books (and Pete The Cat plush dolls -- they signed the bottoms of Pete's white feet) for people who attended the event, Mr. Eric and James enjoyed a big Ajax lunch with booksellers Jill and Frances, and Richard, who came along to pick up the tab and hear more great stories.  Then they returned to the store to sign lots of stock ("the most ever" according to Mr. Eric) before packing back up and rolling out in the long black car.   We think they'll be back one day.

After a bit of rest over the weekend, we got ready to host the (acting troupe), who came to Oxford and staged three performances of "Theodore Boone & the Thrill of Rights" a short play based on John Grisham's new middle-grade detective novel, his second featuring Theodore Boone, called Theodore Boone: The Abduction.   They entertained about four hundred sixth graders at Oxford Middle School, then had an evening show in the Lafayette County Courthouse for the general public.  Wow!  They were great! 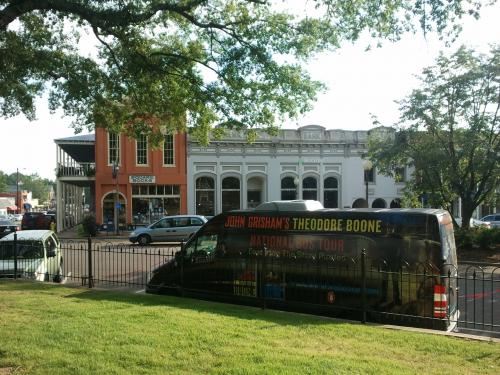 Square Books turned thirty-three years old September 14, and it's now plain to see that the best thing she ever did, at age 25, was to HAVE A BABY, because it is now an eight year old prince(ss) named SQUARE BOOKS JUNIOR that famous writers from all over the world are coming to see!

Question:  Is Square Books Jr a prince or a princess?  Please send your answer, and why, to jill [at] squarebooks.com