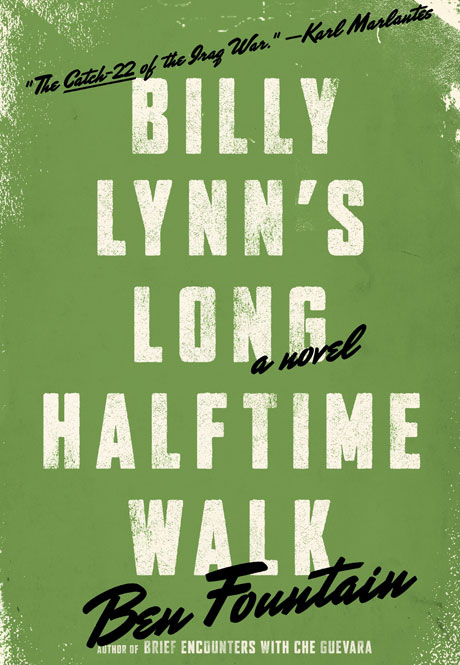 May 2012 Fountain has created a sort of inverted Odyssey in which our hero, Billy Lynn, comes home from the Iraq war to find a whole new catalog of trials and challenges awaiting him and the rest of Bravo Company before they are shipped back to the Gulf. Taking place on a single day, at a Thanksgiving football game in Dallas, the novel not only gives us a fresh take on how we view capitalism, materialism, ourselves, our country, and our military, but also provides a wonderfully empathetic tragic-hero in Billy Lynn, at once a brave and fearless fighting machine while still a very innocent and confused young man. -- Robert Sindelar, Third Place Books, Lake Forest Park, WA

A finalist for the National Book Award!

Three minutes and forty-three seconds of intense warfare with Iraqi insurgents has transformed the eight surviving men of Bravo Squad into America's most sought-after heroes. Now they're on a media-intensive nationwide tour to reinvigorate support for the war. On this rainy Thanksgiving, the Bravos are guests of the Dallas Cowboys, slated to be part of the halftime show alongside Destiny's Child.

Among the Bravos is Specialist Billy Lynn. Surrounded by patriots sporting flag pins on their lapels and Support Our Troops bumper stickers, he is thrust into the company of the Cowboys' owner and his coterie of wealthy colleagues; a born-again Cowboys cheerleader; a veteran Hollywood producer; and supersized players eager for a vicarious taste of war. Over the course of this day, Billy will drink and brawl, yearn for home and mourn those missing, face a heart-wrenching decision, and discover pure love and a bitter wisdom far beyond his years.

Ben Fountain is the author of Brief Encounters with Che Guevara. He has received the PEN/Hemingway Award, the Barnes & Noble Discover Award for Fiction, and a Whiting Writers' Award, among other honors and awards. He and his family live in Dallas.