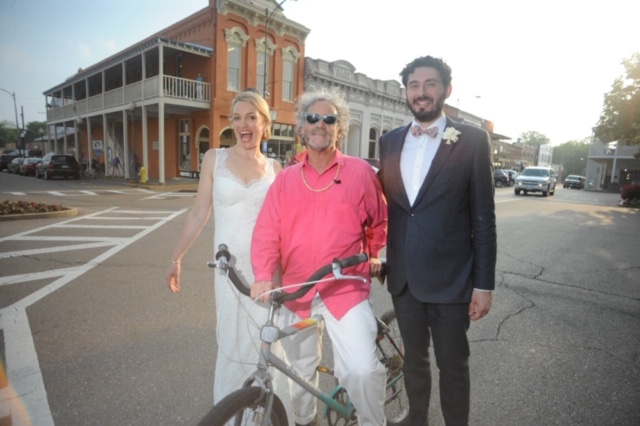 Ron Shapiro, who, as most in this part of the world knows, passed away Monday.  When word got around town, which was instantly, that Ronzo was sick, the reaction was collective denial.   And now his passing seems unfathomable to many.  He was famous in Oxford, and some points beyond, known for, among other attributes, his open spirit, friendliness, playful sense of humor, concern for others, and positive attitude.

The reception staff at Elmcroft, the assisted living place formerly known as Azalea Gardens, and those at the front desk at Baptist hospital, when he had had treatment there, told me, "We've never had anyone with so many visitors."   At the hospital one day I walked in to get a pass and told the receptionist, "I would like to see Mr. Ron Shapiro," and she said, "Well, wouldn't we all like to see him!"

We have in this community a collective treasure trove of memories and stories about Ron, and many of those recently have issued forth on social media.  Throw the rascals in. No shirt, no shoes, who cares?  Sorry, We're Open (see Joe York's video here https://vimeo.com/2236933.)  Koolio.

The photo below was taken at the wedding of Claire Howorth and Mike Nizza. Claire said that, instead of going directly from the wedding to the reception, Ronzo waited until they came out of the courthouse in order to have this picture taken with the newlyweds.  Ron is decked out in signature dress-up fare here: white pants, a billowy pink shirt, with his bicycle & sun goggles, and his string of buddhist prayer beads.   Later that night, he'd put on a self-designed blazer, splashed in pink dye.  Ronzo had quite the sense of style, and often had that whistle/kazoo thing he would blow to signal his arrival -- time to have fun.

Late in his career, post-Hoka, post-Main Squeeze, Ron became a driver ("I'm a pro-fessional," he'd say) for many of the writers who came from various locations, usually the Memphis airport, for appearances at Square Books. Often they were surprised by the appearance of their ride -- and its driver.  And whenever they returned, they requested his service because the company was enjoyable and the conversation interesting.

Ron always had time for a pleasant exchange -- with children, older folks, and people on the street. He was our mascot, our mayor, our cultural ambassador (for which he occasionally asked official status), our confidant (thus also a source of gossip), our conscience and our guide -- for many, many purposes, but, mostly, for how to be.