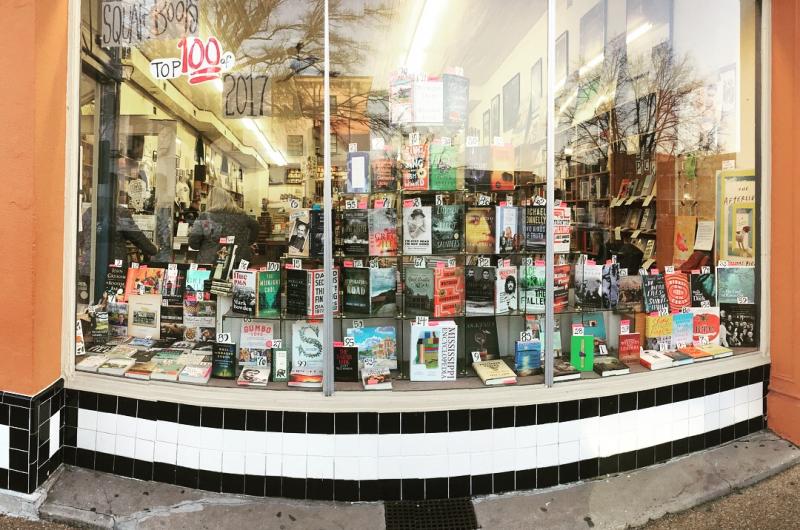 Thanks to loyal local support from those who attend our events, our Signed First Editions subscribers, and the many great authors connected to this area, our 2017 bestseller list is dominated by books written by those close to home, such as Ace Atkins, The Fallen (29), Erin Abbott, How to Make It (92), Alexe Van Beuren and Dixie Grimies’ perennial The BTC Old-Fashioned Grocery Cookbook (88), Heating & Cooling (28) by Beth Ann Fennelly, and Mary Ann Connell’s An Unforeseen Life (7), as well as those from far away who visited here, such as Joe Hagan & Sticky Fingers (72); Omar El Akkad (who got lost while trying to walk to the Square and was found by a man named Ronzo on a bicycle) and American War (15); George Saunders, a long-time SB friend, & Lincoln in the Bardo (8); Amor Towles, A Gentleman in Moscow (24), and his Rules of Civility (66); Mark Bowden, Hue 1968 (46); Michael Connelly, Two Kinds of Truth (62); Denise Kiernan, The Last Castle (55); and Peter Heller, also an SB favorite, with Celine (98).

Jackson, Mississippi natives Jimmy Cajoleas and Angie Thomas contributed significantly with their novels for young readers, Goldeline (30), with following just behind The Hate U Give (32). We were blown away by What Can I Bring? (3) by Elizabeth Heiskell, closely followed by John Cofield’s simply fabulous Oxford, Mississippi: The Cofield Collection (4), and we’re always grateful to John Grisham for supplying us signed copies, especially when he writes two books in the same year – The Rooster Bar (2) and Camino Island (1), when he returned for an event – the first in a good, long while. Michelle Kuo returned to Mississippi for Reading with Patrick (73), and Charlene McCord and Judy Tucker, with several contributors, signed A Year in Mississippi (90).

Poetry matters! with Rupi Kaur’s Milk & Honey (22) and The Sun and Her Flowers (65); Stripper in Wonderland (76) by Derrick Harriell; and Molly Brown’s prize-winning Virginia State Colony for Epileptics and Feebleminded (35).

Literary Oxford’s all-time homie, Bill Faulkner, hit about par with five books on the list. Robert Hamblin’s book about Faulkner, Myself and the World (70), his bio of Evans Harrington, Living in Mississippi (79), and Ed Croom’s pretty The Land of Rowan Oak (33), all made the list. Oxford native Allen Boyer’s history of war in the South Pacific, using his father’s diary as a source, Rocky Boyer’s War (47), remains popular. Other bestseller ghosts of Christmases past include Wyatt Waters’ An Oxford Sketchbook (50), plus his new winner with Robert St. John, A Mississippi Palate (13). Curtis Wilkie is also a twofer with his 7-year-old The Fall of the House of Zeus (38) and this year’s book on JFK, coauthored with honorary Oxonian Tom Oliphant, The Road to Camelot (11). The queen of this multiple-hit parade is Mississippian and former John and Renee Grisham Visiting Writer Jesmyn Ward, who, with Sing, Unburied, Sing (10) became the first woman to win the National Book Award for Fiction twice and the first African American to win twice, with her Salvage the Bones (93) having won in 2011 – but not the first Mississippian to win twice, as the previously mentioned William Faulkner did that, in 1951 and ’55. Current Grisham writer-in-residence and Tupelo native Catherine Lacey made the list with The Answers (20).

Southern Foodways Alliance folks did well – nice going, John T. Edge & The Potlikker Papers (9), Sarah Camp Milam’s SFA Guide to Cocktails (16), and Jessica Harris’s memoir, My Soul Looks Back (84). John Currence continues to reside on our list with Big Bad Breakfast (21), and other chefs include Hugh Acheson, The Chef and the Slow Cooker (64); Square Table, on our list for the thirteenth straight year (28); and Gumbo Love (85) by Lucy Buffett, who visited us this year.

More writers we thank for coming here include a memorable appearance from Daniel Sharfstein with Thunder in the Mountains (82); Kevin Wilson with Perfect Little World (19); those crazy and, if not cuddly, lovable rednecks and The Liberal Redneck Manifesto (40); and that great Mississippi historian David Sansing and Mississippi Governors (59).

Thanks to the great contributors and editors who came to our excellent event for what is definitely the year’s biggest book – 8 ½ lbs & 1,451 pp -- of 2017, The Mississippi Encyclopedia (14) – Ann Abadie, Charles Wilson, Jimmy Thomas, Ted Ownby and Odie Lindsey, as well as to David Dibenedetto, John T. Edge, Donna Levine, John Currence and Vanessa Gregory, who showed nicely by talking well about S Is for Southern (54).

Many paperbacks make the list, including Jennifer Ackerman’s marvelous The Genius of Birds (48); 2-fer Tom Franklin with his perennial Crooked Letter, Crooked Letter (68) and, as editor, Mississippi Noir (37); two Greg Iles titles; Hidden Figures (69) by Margot Shetterly; Neil White’s In the Sanctuary of Outcasts (31); Dispatches from Pluto (6) by Richard Grant; Murder in the Grove (83) by Mike Henry; Ann Patchett’s Commonwealth (86); The Handmaid’s Tale by Margaret Atwood (56); Diane Ackerman’s The Zookeeper’s Wife (81), Anthony Doerr’s tireless All the Light We Cannot See (44), Liane Moriarty’s Big Little Lies (75); Just Mercy (45) by Bryan Stevenson; and The Sarah Book (95) by Scott McClanahan, and we thank him for his reading here.

Biographies do well, depending on their subject or author, and winning combinations came in Walter Isaacson’s Leonardo Da Vinci (86); the Bush girls in Sisters First (91); and the late, great Ron Borne’s book about Jim Carmody, The Big Nasty (52). Hubert McAlexander’s From the Chickasaw Cession to Yoknapatawpha: Historical and Literary Essays on North Mississippi (50) is superb and is certain to be on this list again next year. Killers of the Flower Moon (78) by the great writer David Grann, a fascinating account of the unusual origins of the FBI, was a fall favorite, as were Astrophysics for People in a Hurry (89) by Neil Tyson and Hillbilly Elegy (34) by J. D. Vance. Not biography but still books we love: Norse Mythology (94) by Neil Gaiman maintained interest throughout the year, as did 2016 NBA winner, Colson Whitehead and The Underground Railroad (97), this book’s second year on the list here, and Joan Didion’s South & West (49).

More Mississippians: Mississippi Blood by Greg Iles (5); Mary Miller and her fine stories, Always Happy Hour (57); Jeff McManus and Growing Weeders into Leaders (39) a great event; Charlie Spillers with Confessions of an Undercover Agent (42); John Marszalek and his two co-editors of The Personal Memoirs of Ulysses S. Grant (64), David Nolen and Louis Gallo, who came here from Starkville and made a fabulous presentation this year; Pike County native, now living here in Oxford, Michael Farris Smith, with his searing Desperation Road (12), and whose new novel, The Fighter, will be out in March; Jim McCafferty and The Bear Hunter (60); On Being Afraid of the Dark (71) by Ken Wooten; Oxford’s Kathleen Wickham’s excellent book on the Ole Miss desegregation crisis and twelve journalists who covered it, We Believed We Were Immortal (61); The Goat Castle (67) by Karen Cox; David Crews’ Mississippi Book of Quotations (15); our friend, Richard Ford, and his stirring memoir of his parents, Between Them (41); and Oxford’s Julie Cantrell, whose Perennials (46) is set here.

Along with #50, 7, 15, 52, 71, 59, and #43, The Statue and the Fury by Jim Dees, we express special thanks to our friends here in Oxford at Nautilus Publishing, for bringing these titles top life and for all you’ve done for your authors and for Square Books, too.

From afar but not for the first time here, thanks to Robert Olmstead and Savage Country (23) and Nathan Englander, Dinner at the Center of the Earth (25), and, here for the first time, Laura Lee Smith with The Ice House (30) and Ladee Hubbard and The Talented Ribkins (27) also. Other appreciated appearances include those by Brian Van Reet with Spoils and Lydia Peele with The Midnight Cool (99 & 100) as well as Maile Meloy and Do Not Become Alarmed (18); Hannah Tinti and her Twelve Lives of Samuel Hawley (17); Tim Tyson and his memorable appearance with The Blood of Emmett Till (36); Nate Blakeslee and American Wolf (77), one of our favorite books this year; special thanks to Mary Lindsay Dickinson for appearing on Thacker Mountain on behalf of her late husband and author of I’m Just Dead, I’m Not Gone (68), Jim Dickinson – love those Dickinsons. Finally, certainly not least, let us thank Square Books’ well known secret ingredient, Lisa Howorth, for not just yet trying out her Flying Shoes (58).

Thanks to these books and their authors, and thousands more not named here, for giving Square Books its best year yet.