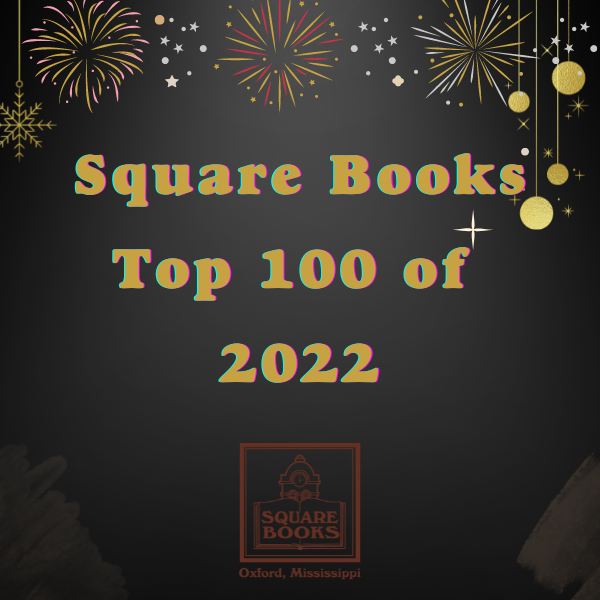 In Square Books' early childhood, there were just a handful of writers around town -- Barry Hannah, Willie Morris, Ellen Douglas, and a couple more.

Today, our 2022 bestseller list is full of writers who live in Oxford and/or are connected to the University of Mississippi. Curtis Wilkie put two books on this year's list -- his classic The Fall of the House of Zeus (52) and the more recent When Evil Lived in Laurel (49). An interesting appearance this year is the Wildsam Guide to Oxford (17), which includes short pieces from a number of Oxford writers. Jackie Mayfield's Oxford & Ole Miss is on the list every year (72), as is Wyatt Waters' Oxford Sketchbook (16), and John Currence's Big Bad Breakfast (51), as was John Cofield's first volume of Oxford, Mississippi (35), which was outdistanced easily, of course, by the new 2022 second volume (6).

Imperishable is our main man, William Faulkner, with six titles on our list: the paperback and Modern Library editions of both The Sound and the Fury (61 & 87) and As I Lay Dying (71 & 84), the Selected Stories (30), and a small edition of The Bear (19), which is short and inexpensive enough for some to dare to read.

Other books on the list with a local connection include Shifty's Boys by Chris Offutt (82), a compelling noir effort, as is the case with local rock legend Tyler Keith and his first book, The Mark of Cain (65). Ralph Eubanks' excellent gift of a book, A Place Like Mississippi (23) tells it like it is, and the novel that is an adventurous car ride around Oxford, The Last Taxi Driver (83) by Lee Durkee, is now in paperback. Current Grisham writer-in-residence Deesha Philyaw arrived here just in time for us to help celebrate The Secret Lives of Church Ladies (88), a finalist for the National Book Award and winner of The Story Prize; Jake Keiser took time out to write Daffodil Hill (20); Julie Mabus made a splash with Confessions of a Southern Beauty Queen (26); we miss Julia Reed but she still had a hit in Dispatches from The Gilded Age (62), not too far from Dispatches from Pluto (21) by Richard Grant, who fled the territory, leaving behind this Natchez book, The Deepest South of All (32). It turns out that Snackbar's Vishwesh Bhatt writes as well as he creates culinary delights, with his I Am From Here perched at number 5. What could top that, you ask? Only John Grisham -- The Boys from Biloxi (1) and Sparring Partners (2) -- and the Ole Miss baseball team: from Neil White and Nautilus Press, the lavishly pictorial Ole Miss 2022 Baseball National Champions (3) and Chase Parham's narrative version of the same event, Resilient Rebels (4).

And this Colleen Hoover person you may have heard about, where does she fit in at Square Books? Turns out, just about anywhere her readers want, with eight different titles among our top 100, as high as # 9 (It Ends with Us) down to # 79 (Down to Us), and four of her novels in the top twenty. John Grisham had two additional books in the upper reaches of our list -- The Judge's List (7) and Sooley (a kind of personal favorite - 13). Delia Owens' Where the Crawdads Sing doesn't rest (11); ditto, Lisa Patton and Rush (40); and Taylor Jenkins Reid, The Seven Husbands of Evelyn Hugo (12) and Malibu Rising (92). Emily Henry put two on our list -- Book Lovers (29) and Beach Read (59), as did Amor Towles -- The Lincoln Highway (75) and A Gentleman in Moscow (100). Familiar friends remained faithful -- Madeline Miller's Circe (43) and The Song of Achilles (33), not to mention The Liberal Redneck Manifesto (68), by Trae Crowder ‘n them.

We were much abetted by author visits, according to the numbers: Beverly Lowry and her exceptional true crime tale set around Leland, Mississippi, Deer Creek (22); good friend Berkley Hudson with his fascinating book of Columbus, Mississippi, photography from O. N. Pruitt, Possum Town; Rinker Buck's excellent read on Life on the Mississippi (38); Jon Meacham -- always good -- with his book on Lincoln, And There Was Light (70); Robert St. John and his Walter Anderson (24); You Are My Sunshine (93), by Sean Dietrich, who killed it on Thacker; likewise, at his reading, Bud Smith, with Teenager (94); Jay Wellons and All That Moves Us (56); Imani Perry, whose South to America (34) would go on to win the National Book Award for Nonfiction; Wyatt Waters and Watercolor Road (28); the reliably readable Rick Bragg, author of Speckled Beauty (41) and Where I Come From (69); and from our favorite writer couple -- Casey Cep and Kathryn Schulz, with, respectively, Furious Hours (66) and Lost & Found (85). We also managed to get a fair supply of signed copies of Patti Smith's visually contemplative Book of Days (78).

Likely on a number of lists as well as our own were Run Rose Run by Dolly Parton (64); Matthew McConaughey's Greenlights (67), and another Hollywood memoir, I’m Glad My Mom Died (58) by Jennette McCurdy: Geraldine Brooks' novel, Horse (96); The Boy, The Mole, The Fox and the Horse by Charley Mackesy (92); Midnight Library (86) by Matthew Haig; Candice Millard's, book on the Nile, River of the Gods (90); The Body Keeps the Score by Bessel Van Der Kolk (98); and The Paris Apartment (73), by Lucy Foley. Cormac McCarthy's long-awaited novel, The Passenger, arrived late in the year but staked a claim on #37. Tynan Kogane's book of Cat Poems howled its way to #79, while that funny Field Guide to Dumb Birds by Matt Kracht was smart enough to get to #95, and, a certain favorite here, The Rodent Not Taken and Other Poems by Cats, clawed its way to #25.

Thanks to all you readers and writers for making all these dreams, and so many more, come true. RH