Tony La Russa, the number-three all-time winningest manager in major league baseball history (he retired in 2011 only thirty-five wins behind John McGraw; the no. 1 is safely held by Connie Mack), came to Square Books November 29 to sign copies of his new book, One Last Strike, published by our friends at Morrow. He sat down at 6:45 p.m. in the back of the main store, pulled out of his pocket and plopped down on the table three enormous rings -- one for each of his World Series titles, one with the Oakland A's and two with the St. Louis Cardinals -- and began signing books for the four hundred-plus fans who greeted him enthusiastically. Many were in Cardinals' jerseys, caps, and jackets; some were moms or wives getting Christmas gifts; lots of coaches, all kinds of coaches, came through, including former Ole Miss and Chicago Cub great Donnie Kessinger, who knew La Russa back in the day; and many in the crowd were Ole Miss students, including the four freshmen pictured below, who got themselves a book and a memorable college first-year experience: 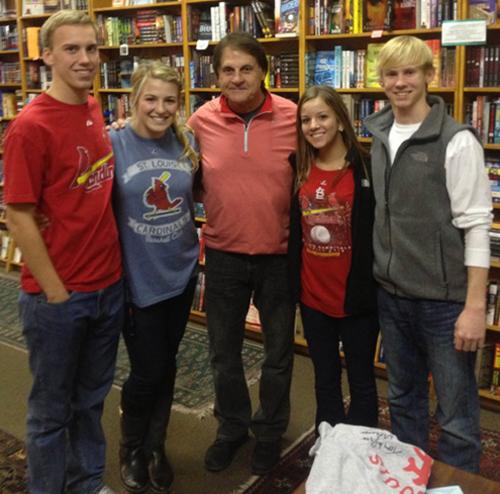 
Mr La Russa -- who, whenever addressed that way, immediately corrected, "Tony -- Mr. La Russa is my dad" -- alternately sat and stood while he, Tony, as we now know him, signed books, without a break, until 10:30 p.m.  There were lots of stories, lots of pictures, lots of questions, lots of requests to include "11 in '11" with the signature. He finally finished up and got out with us for some pizza and a beer, when eventually Slade said, "You know, what's the deal with all the signs for steals, bunts, hit and run -- how on earth do you guys do that, and do you ever get confused?" Tony rose from his chair and began, "I probably shouldn't tell you some of this -- trade secrets..." and patiently proceeded with a 15 minute dissertation and demonstration, touching his nose, his ear, rubbing his arms -- at which point those who hadn't figured out which man in the bar was the famous baseball manager were probably able to guess, if they weren't trying to steal third.

We had filled up the front window with about 80 copies of One Last Strike that did not get signed; so, when we walked back by the store after dinner, Tony cheerfully closed the game by signing those remaining copies. Tony La Russa -- winner, champion, and one of our favorite authors, ever.  RH