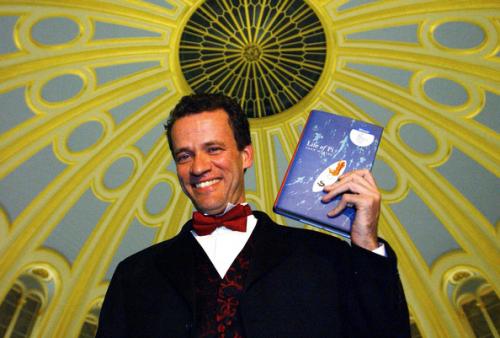 One of the Barksdale Honors College classes is reading Yann Martel’s Life of Pi this semester, and when it was announced the author planned to visit Square Books on March 9, we immediately received a request from the class professors asking whether he might meet with the class.  Through the good offices of Spiegel and Grau, the publishers of Martel’s new paperback edition of Beatrice and Virgil, which brought him to Oxford, the meeting was arranged.  At 3 p.m. close to 50 students convened at Off Square Books to hear what the 2002 Man Booker Prize winner had to say.  An initial question about Life of Pi led to a lengthy discussion about faith as the book’s major construct, why Hinduism was used as a particular vehicle (it’s a monotheistic religion that may be expressed and accessed in a variety of ways), and some of the writer’s own ideas about religion and philosophy -- all fascinating.  At the end of the discussion Martel was presented a personally inscribed copy of I Beat the Odds, by former Ole Miss football player Michael Oher, who, while the discussion took place, had been in the back room signing copies for the ongoing demand at Square Books.

Mr. Martel took a break, walking around the Oxford square for a while, and returned for another session with a different group of readers from the community.   He spoke mainly of Beatrice and Virgil, and of the inspiration, challenges, and uses of writing in the form of a novel about the Holocaust.  In the Q & A session a visitor from the Quebec Province of the author’s home nation, Canada, asked why the writer, who grew up in a French speaking family, chose to write in English – because, while it is true, he said, that he was raised speaking French, he was educated in English-speaking schools, and because English has a much broader lexicon than most other languages.

We very much appreciate Mr. Martel’s visit, his third, to Oxford.   He came here in 2007 with the artist of the illustrated edition of Life of Pi, Tomislav Torjanac, and again in 2001, when Yann Martel had his very first book signing in the United States, at – we’re proud to say -- Off Square Books, back when we were in the old Denton store building. RH